No. 8 Notre Dame extended its winning run to four games with a nail-biting 24-20 victory over the Temple Owls on Saturday. The Fighting Irish will look to sustain the momentum of that huge win when they take on the Pittsburgh Panthers in a marquee clash at Heinz Field this coming weekend.

Who will grab the advantage in this blockbuster showdown? Read on below for an in-depth breakdown of this college football matchup and while you’re at it, you can check out our previews of No. 4 LSU vs. No. 7 Alabama and No. 17 Florida State vs. No. 3 Clemson.

Notre Dame’s playoff dreams are still very much alive after escaping with a narrow 24-20 victory over Temple on Saturday. DeShone Kizer hit Will Fuller with a 17-yard touchdown pass with 2:09 remaining in the game to lift the Irish to the comeback victory. That’s the third time this season that Kizer has led Notre Dame from behind in the fourth quarter.

[sc:NCAA240banner ]The Irish will look to keep the momentum going this coming Saturday when they face the Pittsburgh Panthers. For Notre Dame to grab the important win, it needs to execute much better in the red zone area. The Irish only produced 10 points out of their four red zone trips in the opening three quarters in the game against Temple. That simply won’t do against a Pittsburgh defense that’s allowing just 22.1 points per game this season, 36th in the FBS.

The onus then is on Kizer to unlock such a top-notch defensive side.  What makes Kizer such a fantastic quarterback is his excellent dual-threat ways. Apart from throwing the game-winning touchdown pass against Temple, he also rushed for 143 yards and a pair of touchdowns in that contest. His 79-yard touchdown run was the second-longest by a Notre Dame quarterback in school history. 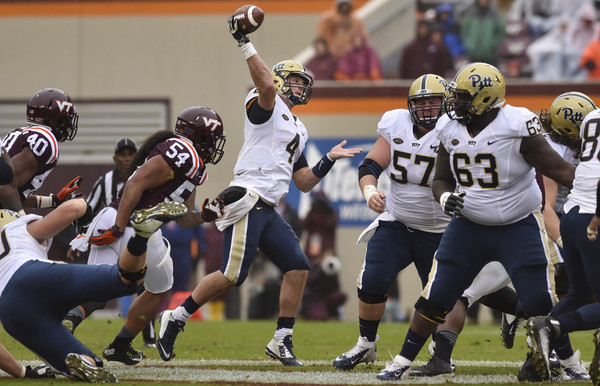 Pittsburgh’s playoff hopes were dealt a major blow on Thursday night when it suffered a gut-wrenching 26-19 loss to North Carolina in a battle of ACC upstarts. Marquise Williams threw two long touchdown passes to send the Panthers crashing to their first defeat in their last five games.

It was a disappointing result for the Panthers who have now lost their last three games against the Tar Heels. For the third straight season, Pittsburgh had no answer for the ever-reliable Williams. He now has 1,020 total yards in three career victories against the Panthers.

They will look to get their season back on track when they take on the streaking Fighting Irish this coming Saturday. For the Panthers to record a massive upset, they will need to do a much better job on the defensive end. They allowed the Tar Heels to rack up a total of 444 yards on Thursday. That’s way above the 325.3 yard-per-game average that they’re surrendering this season.

It’s also important for the Panthers that they get a huge game from quarterback Nate Peterman. He completed 27 of 42 passes for 262 yards and a touchdown in that loss to UNC. For Peterman to better that performance, he will need to get more solid protection from Pittsburgh’s offensive line. Peterman was sacked five times by the Tar Heels on Thursday.