There’s just no stopping No. 3 Clemson right now. The Tigers stretched their unbeaten run to eight games with a thrilling 56-41 victory over the NC State Wolfpack on Saturday. They will look to extend their winning streak even further when they take on the No. 17 Florida State Seminoles in a mouth-watering clash at Memorial Stadium.

Who will emerge victorious in this ACC showdown? Read on below for an in-depth breakdown of this critical matchup and while you’re at it, you can check out our previews of No. 4 LSU vs. No. 7 Alabama and No. 5 TCU vs. No. 12 Oklahoma State.

The Florida State Seminoles returned to winning ways Saturday with an emphatic 45-21 victory over the Syracuse Orange at Doak Campbell Stadium. It was a huge bounce-back win for the Seminoles who suffered a gut-wrenching 22-16 defeat to Georgia Tech the previous weekend. With the victory, the Ducks improved their overall record this season to 7-1 and in the process keep their slim playoff hopes alive.

[sc:NCAA240banner ]Much of the credit should be given to quarterback Sean Maguire and running back Jacques Patrick who stepped up big time in the absence of Everett Golson and Dalvin Cook. Despite missing their top two playmakers, the Seminoles produced one of their best offensive displays of the season. Maguire passed for 348 yards and three touchdowns while Patrick added three scores on 162 yards rushing. Such was the Seminoles’ dominance in this game that they collected a whopping 575 total yards against Syracuse, their second-highest mark this year.

The question now for head coach Jimbo Fisher is who will be his starting quarterback against Clemson this coming Saturday. Golson’s status remains uncertain as he’s still recovering from a concussion he suffered in the game against Georgia Tech. Fisher will have no problem going with Maguire, though, who showed he can be trusted upon in the game against Syracuse. He had 302 yards in the first half of that contest, which is the first time a Florida State quarterback had done that since Chris Weinke’s 302-yard performance against Clemson in 2000.

The Seminoles will have their work cut out for them, however, against a Clemson side that is fifth in the FBS in total defense, allowing just 278.1 yards per game this season. That being said, the Seminoles will fancy their chances against the still-unbeaten Tigers as they have fared extremely well against them of late. Florida State is 3-0 in its last three meetings against Clemson.

Create a betting account now and cash in on all the NCAA football action. 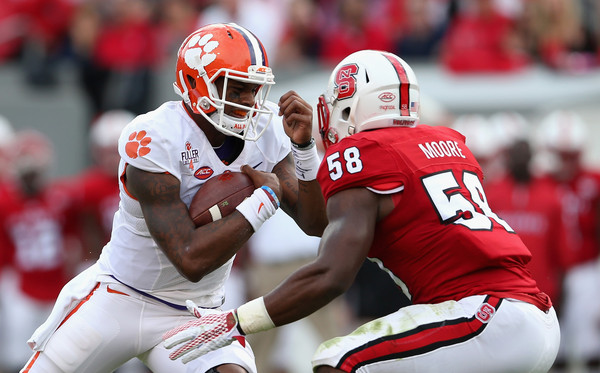 Clemson’s perfect start to the season continued on Saturday with a 56-41 victory over the NC State Wolfpack. It was another convincing performance by the Tigers who have now won 11 straight games dating back to last season. The victory also marked Clemson’s 36th straight win against teams unranked in the AP Top 25.

Providing the impetus for Clemson’s sizzling start has been their phenomenal offense. The Tigers are 11th in the FBS in scoring, averaging a whopping 40.6 points per game. A week after piling up 567 yards in a 58-0 win against the Miami Hurricanes, Clemson finished with an incredible 623 yards against a defense ranked third nationally and allowing just 251 total yards per outing. Deshaun Watson was simply unstoppable against the Wolfpack, throwing for 383 yards and five scores. He also wreaked havoc against the NC State defensive line, rushing for 54 yards and a touchdown.

Things are bound to get tougher, though, for Watson and the rest of the Tigers as standing in their way in the next match are the 17th-ranked Seminoles. Florida State is 14th in the FBS in scoring defense, allowing just 16.8 points per game this season. Watson will be severely tested by a Florida State secondary that’s allowing just 184.1 yards through the air this year, 22nd in the FBS.

With that being said, the Tigers need to get their ground game going right from the get-go. Clemson has been superb with their rushing game this year with the Tigers averaging 218.1 yards on the ground this season. That’s good for 19th in the FBS. Clemson recorded 240 rushing yards in its victory against NC State on Saturday.