Christian Hackenberg and the Penn State Nittany Lions are on a nice little roll lately. They’ve won their last five games, including their first two conference assignments. However, that streak is in grave danger as they visit No. 1 Ohio State in Columbus. Despite some uneven performances, the Buckeyes are still piling up the wins. Will they get a 27th-straight conference win over their old Big Ten foes?

Read on below for our breakdown of this Big Ten matchup. And for more interesting conference contests, check out our previews of Iowa vs. Northwestern and Florida vs. LSU.

After dropping its first game of the season at Temple, Penn State has reeled off five straight wins, although all five were at home and against less-than-stellar competition. In their most recent game, they had arguably the most impressive win, a 29-7 triumph over Indiana.

[sc:NCAA240banner ]Christian Hackenberg still isn’t playing up to the potential that once saw him topping NFL mock drafts, but he’s gone three games without throwing a pick, which is an improvement. He went 21-of-39 for 262 yards and threw two touchdowns (he also rushed for two more touchdowns) against the Hoosiers.

Penn State doesn’t have the most prolific offense – it’s 11th in the Big Ten in scoring offense (25.2) and 13th in total offense (344 yards per game) – but it can reel off big plays from time to time. Penn State has 20 scrimmage plays of 30-plus yards (the most in the conference) and could be able to take advantage of a Buckeyes defense that has already given up five plays of 50-plus yards, third-most in the Big Ten.

The Penn State defense has been pretty stellar this season, too. It’s currently No. 17 in the S&P+ defensive rankings, and is giving up just 3.07 rushing yards per carry (No. 3 in the Big Ten). Given the Ohio State offense’s inconsistency, especially at quarterback, it definitely has a shot of slowing down the Buckeyes.

Penn State did just that last season, as it forced Ohio State to double overtime in an eventual 31-24 home loss.

Create a betting account now and cash in on all the best college football action. 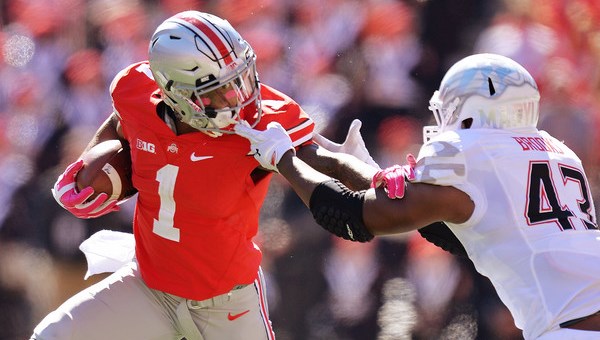 Despite a seemingly comfortable 49-28 win, Ohio State’s worrisome habit of playing down to its competition continued against Maryland. But the Buckeyes still keep banking those W’s. Their unbeaten streak in conference is now up to 26 games.

The most interesting development in their most recent game against the Terps was head coach Urban Meyer’s full implementation of a three-quarterback rotation. Cardale Jones went 21-of-28 with 291 yards and two touchdowns. J.T. Barrett then took over primarily in the red zone, and had 12 carries for 62 rushing yards and three rushing touchdowns. Braxton Miller also took some snaps from the Wildcat.

It remains to be seen whether this setup can work in the long term, though Meyer has made it work in the past when he rotated Chris Leak and Tim Tebow in Florida.

With those three and running back Ezekiel Elliott (five touchdowns in his last two games), there’s enough talent for this Buckeyes team to score points. But whether they can score enough to cover a massive 17-point spread is another matter entirely, especially if the defense keeps underperforming.

Through two conference games, Ohio State is giving up 27.5 points, 10th out of 14 Big Ten teams. That’s just unacceptable given all the talent in that unit, and it’s the biggest impediment in the Buckeyes’ chances of blowing out Penn State. The Buckeyes are just 1-5 ATS this season, with five consecutive failed covers.