The Philadelphia Eagles, powered by their high-octane offense, have soared to a 3-0 start to begin the season. Their perfect record will be on the line when they visit San Francisco to face the 49ers, who will be desperate for a win after faltering in the second half two weeks in a row.

The Eagles come in with a chance to extend their lead on the Giants or Redskins, two division rivals who will square off on Thursday night. Find our preview of that game here, and read on for more on this playoff-caliber matchup.

The Philadelphia Eagles are flying high as one of the three remaining undefeated teams in the NFL after a thrilling 37-34 win over the Washington Redskins on Sunday.

[sc:NFL240banner ]The Eagles’ prolific offense continued to put up points with its third-straight 30-plus-point showing, while Nick Foles also passed for over 320 yards for the third-straight game with three touchdowns. Foles also did not throw an interception, after recording one in each of his first two games.

But despite their 3-0 start, the Eagles still have some major question marks on both sides of the ball.

Their running game was thoroughly shut down against the Redskins, with just 54 yards on 25 carries. LeSean McCoy, who has failed to record over 80 rushing yards in a game this season, was limited to 22 yards on 19 carries, his lowest output since 2012. Their offensive line, one of the best in the business last season at run blocking, has struggled so far amid instability in personnel.

And on the other side, the defense has allowed increasingly more yards and points through the first three weeks, which came to a head last Sunday as Philadelphia allowed 34 points and 511 yards at home to the Kirk Cousins-led Redskins.

While their defense is liable to give up its fair share of points, the offense has enough weapons to give the 49er defense problems even with an inefficient ground game. Rookie Jordan Matthews exploded with the first two touchdowns of his career against the Redskins, making him another threat alongside the dangerous Darren Sproles (263 total yards and two touchdowns) and Jeremy Maclin (16 catches for 296 yards with three touchdowns).

The total has gone over in all three of the Eagles’ games this season. 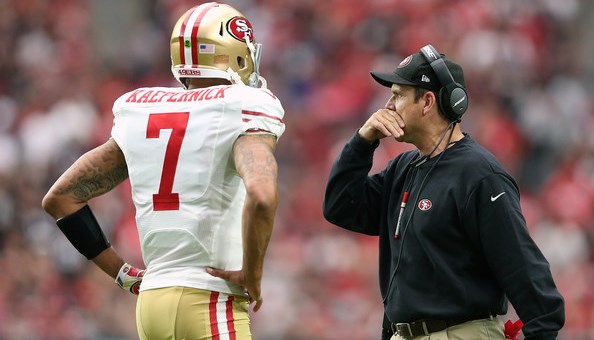 Back-to-back weeks have seen back-to-back uncharacteristic second half collapses from the San Francisco 49ers. After letting a 13-point fourth quarter lead slip at home against the Bears, the Niners were shut out for the entire second half in Arizona as the Cardinals rallied from eight points down to win 23-14.

While some key interceptions cost them the game against Chicago, the Niners were architects of their own downfall against the Cards. San Francisco ditched their bread-and-butter rushing attack in favor of a more pass-oriented offense. So instead of milking the clock and protecting their lead, Colin Kaepernick eventually threw 37 times, the second-most of his career, while Frank Gore carried the ball only six times the entire game for a measly 10 yards.

Granted, Kaep played well, accounting for 299 of the team’s 318 yards on offense, but the Niners simply failed to turn those yards into points. The possible return of tight end Vernon Davis, who missed the game at Arizona due to injury, will be a big help in that regard. Davis is arguably their best red zone receiving threat, and has a team-leading two touchdowns this season.

But if the Niners don’t wish to get into a shootout against the Eagles, they will need to re-establish that running game in order to slow the game’s tempo down against Philly’s fast-paced offense. Prior to his utterly forgettable six carry, 10 yard night, Gore had been averaging a healthy 4.5 yards per carry in his first two games.

More importantly though, Jim Harbaugh and the Niners will have to do much better job of closing out games. Through three second-halves, San Francisco has now been outscored by an amazing 52-3.

The Eagles let fly from the air and McCoy recovers to gash the Niners on the ground as Philly continues to pile up the points. Take the Eagles (+5) to soar to an upset win at San Francisco. Create a betting account today and score with more NFL upsets this season.