Philip Rivers and the San Diego Chargers suffered insult to injury as their five-game winning streak ended at the hands of the Kansas City Chiefs amid more injuries to their already decimated defense. The Chargers won’t have much time to lick their wounds as they need to get ready to visit the record-setting Peyton Manning and his Denver Broncos on Thursday Night Football with the fate of the AFC West title at stake.

Over in the NFC, the Green Bay Packers are poised to extend their unbeaten run at the Superdome against the struggling New Orleans Saints. Check out our preview of that game here, and read on for more on this AFC West showdown.

The writing had been on the wall after the Chargers just barely beat the winless Oakland Raiders the week before, but their five-game winning streak finally came to an end on Sunday as they fell at home to the Kansas City Chiefs, 23-20. Since covering their first five games in a row, the 5-2 Chargers have now failed to cover in the past two weeks.

[sc:NFL240banner ]The normally excellent Philip Rivers, who had recorded a passer rating of 120 or better in five consecutive weeks, had a rare off-night. Rivers completed just 55 percent of his passes for 205 yards and two touchdowns with one interception, finishing with a mediocre 83.4 rating. The Chargers’ excellent third-down offense was also bogged down, converting just three in 10 attempts.

It’s tough to see someone as good as Rivers having two bad games in a row, but the Denver defense represents quite a significant challenge. Nevertheless, this is still a Chargers offense that dominated the Seahawks’ shutdown D back in Week 2, with Rivers completing almost 76 percent of his passes for 284 yards and three touchdowns.

But the bigger concern for the Chargers is their own defense, which is experiencing an injury crisis just as they’re about to face perhaps the most fearsome offense in the league on the road and on a short week.

Cornerbacks Brandon Flowers and Steve Williams left their game against the Chiefs with a concussion and a groin injury, respectively, and could join rookie Jason Verrett, who’s missed the last two games with shoulder issues, on the sideline.

The Chargers are already missing linebackers Manti Te’o, Jeremiah Attaochu and Melvin Ingram, dynamic playmakers who would’ve been key contributors in stopping Denver’s explosive offense. As it stands, San Diego will be relying on predominantly special teamers at linebacker to stop the likes of Julius Thomas and Wes Welker up the middle.

San Diego has covered in five of its last six visits to Mile High. 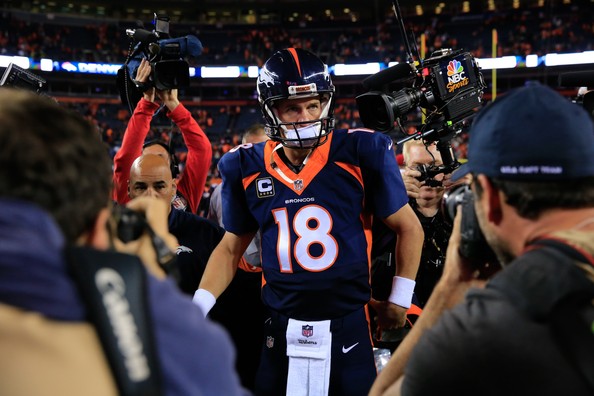 While Peyton Manning broke yet another record to strengthen his claim as the best quarterback ever, the 5-1 Denver Broncos are increasingly looking like the best and most complete team in football.

Manning was nearly flawless as he completed close to 85 percent of his passes for 318 yards and four touchdowns in a 42-17 blowout win over the San Francisco 49ers on Sunday night. Those four TDs were the the 507th to 510th of his career, moving him two clear of Brett Favre in the all-time list.

After Manning masterfully carved up a depleted Niners defense missing its top linebackers, he’ll be handed a Chargers defense that is just as, if not more banged up both in the linebacking corps and in the secondary.

Fresh off a 100-yard performance against the Jets, running back Ronnie Hillman also had another very good game filling in for the injured Montee Ball. Hillman rushed for 74 of the team’s 115 rushing yards, caught for 29 more and scored his first two touchdowns of the season to give the Broncos a more balanced attack.

Finally, the Denver defense was perhaps the most impressive takeaway from the entire game. They held the 49ers to just 310 yards (almost a third of which were during garbage time), including just 62 yards on the ground, and sacked Colin Kaepernick a season-high six times. The Broncos are just one of two teams in the top five in both pass defense and run defense according to DVOA.

It may be too early to proclaim the Broncos D as 2013 Seahawks-caliber good, but it has been good enough to limit their last five opponents to 20 points or fewer in regulation. On the flipside, their offense is getting closer toward the historic level it played at last season. The Broncos are averaging 38 points per game in the last three games, which they comfortably covered.

The Broncos deliver another dominant display on both sides of the ball as they win and cover at home against the Chargers. Create a betting account now to cash in on Super Bowl-caliber teams rising above the competition.