The San Diego Chargers added yet another loss to a disappointing season, bowing down 33-3 at home to Kansas City. The Chargers now face a road game against a surging Jacksonville Jaguars side, which is fresh off a pivotal divisional win after beating Tennessee on Thursday night. Can the Chargers rebound, or will the Jaguars make it three-straight victories?

Jacksonville is steadily inching its way to the top of AFC South, so you might want to check out the two division leaders’ matches in Week 12 as well with our complete previews for the Saints vs. Texans and Buccaneers vs. Colts.

Betting on the San Diego Chargers (2-8)

The San Diego Chargers reached a new low Sunday with their worst offensive performance this 2015. The Chargers were limited to just one field goal in a 33-3 beatdown at the hands of the Kansas City Chiefs. Quarterback Philip Rivers had his worst outing with season-lows of 19 completions, 178 yards passing and a 65.7 passer rating against the Chiefs.

[sc:NFL240banner ]The Chargers also couldn’t get going on the ground with just 52 yards on 25 carries, with Rookie Melvin Gordon leading the backfield with 37 measly yards on 15 carries. The rushing offense may continue to struggle against Jacksonville, which ranks eighth in the league with just 94.7 yards rushing allowed per game. But Rivers could once again put up gaudy numbers against one of the league’s worst passing defenses.

The Jaguars are allowing 262.8 passing yards per game, while Rivers is chipping in 337 yards himself per contest. Furthermore, Rivers is no stranger to putting up big numbers on the road; he set franchise records for completions (43), attempts (65) and passing yards (503) at Green Bay in October. Another stellar road performance this season had him complete 75.7 percent of his passes for 301 yards and three touchdowns in a 29-26 loss to Baltimore in Week 8.

Rivers will need to be at the top of his game once more, especially with the Chargers’ defense ranking among the league’s worst with 372.1 total yards allowed per game. San Diego has specifically struggled against the run, allowing 122.9 yards rushing per game (26th in the league), and could very well struggle in limiting Jacksonville’s solid rookie running back T.J. Yeldon.

The Chargers have lost all four of their road games this season, but are 2-2 ATS in those games.

Betting on the Jacksonville Jaguars (4-6) 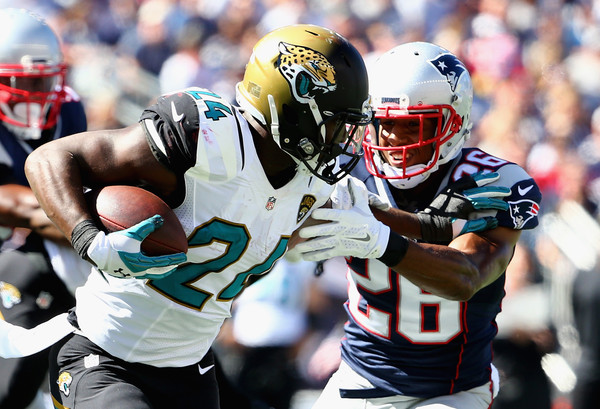 Can you believe it? The Jacksonville Jaguars have a chance to crash the playoffs if they can win the woeful AFC South. At the top of the division, Indianapolis and Houston are both just two games ahead of the Jags with 5-5 records, and both are also currently being hindered by injuries to key players. The Jaguars, meanwhile, will benefit from the extended rest period after a 19-13 win over Tennessee this past Thursday night, so they’ll be fresh for the home game against the reeling Chargers next Sunday.

Bortles still has all the tools he needs to carve up San Diego. He has a pair of deep-threat targets in Allen Robinson and Allen Hurns, who are averaging 17.4 and 16.3 yards per catch, respectively. The two Allens even have team-highs of seven receiving touchdowns apiece this year. Bortles also has a solid red-zone target in tight end Julius Thomas, who caught the game-winning five-yard touchdown pass on Thursday.

If there’s a stage to shine for rookie running back T.J. Yeldon, it’ll be against the Chargers. San Diego has struggled against the run this season, ranking in the bottom 10 of the league in rushing defense. Yeldon has rushed for 64 yards or less in his last three games, but isn’t shy to break out for big games with two 100-yard games this season already.

On the other side of the ball, the Jaguars have a good chance to disrupt San Diego quarterback Philip Rivers if they can get to him on the pass rush. Leading the way are Aaron Colvin and Ryan Davis, who lead the team with four and 3.5 sacks respectively. But having Colvin, a cornerback, blitzing in for the sack may leave a receiver open, one which Rivers could pass to for a long gain.

The Jaguars are 3-1 SU/ATS in their last four games.

The Jags extend their win streak to three games to keep their playoff hopes alive. Create a betting account now and get your wagers in quick and easy as the NFL season continues to heat up.