After racking up five straight wins, the San Diego Chargers’ dominant run was halted by back-to-back losses to the Kansas City Chiefs and the Denver Broncos. The Miami Dolphins, meanwhile, are trending in the right direction after winning two straight for the first time this season. Read on as we break down this crucial AFC showdown.

We’ve got all your football needs covered heading into Week 9. Check out our preview of the New York Giants vs. Indianapolis Colts game as well as our look at Sunday Night Football’s Baltimore Ravens vs. Pittsburgh Steelers.

The San Diego Chargers moved the football well in a 35-21 loss to the Denver Broncos, but could not stop a red hot Peyton Manning and Emmanuel Sanders. After the loss, the Chargers are now 0-3 ATS in their last three games.

[sc:NFL240banner ]The Chargers have a passing combo of their own in quarterback Phillip Rivers and tight end Antonio Gates. Rivers went 30-for-41 for 252 yards with three touchdowns and two interceptions against Denver. The Chargers QB has now thrown a touchdown pass in a franchise record 28 consecutive games and has multiple scoring passes in seven straight.

Gates became the franchise all-time leader with 9,610 receiving yards after he caught five passes for 54 yards and two touchdowns last Sunday. His nine touchdowns are tied for the most in the NFL this season.

Rivers and Gates will continue to put the Chargers on the scoreboard, but may have some difficulty doing so against Miami’s third-ranked pass defense (allowing 211.6 passing yards per game).

With Miami focused on the Rivers and Gates connection in the passing game, the Chargers may have an opportunity to open up their running game after Thursday night’s disappointing performance against Denver. Rookie running back Branden Oliver finished with 36 yards on 13 carries after totalling 282 yards and two scores on 60 carries in the three games prior to Denver.

Oliver will have more room to maneuver against Miami’s defensive line, which was torched for 176 yards by Jacksonville’s 25th-ranked running attack on Sunday.

On the other side of the ball, the Chargers’ banged up secondary, missing Brandon Flowers (concussion) and Steve Williams (groin), should have a better showing against the Dolphins’ passing offense. The Dolphins failed to establish their passing game as quarterback Ryan Tannehill completed only 55 percent of his passes.

The total has gone under in the last five meetings between the Chargers and the Dolphins.

Create a betting account now and start winning with bets on the NFL. 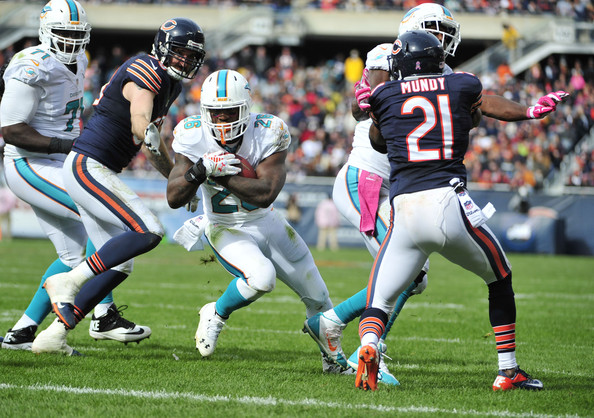 The Dolphins’ passing offense struggled to find its rhythm. Ryan Tannehill went 16-for-29 for 196 yards with a touchdown and an interception, while leading receiver Mike Wallace caught two passes on seven targets. Expect the Dolphins to continue struggling through the air as they take on the Chargers’ seventh-ranked pass defense that has allowed 219.1 yards per game.

Struggling to get considerable yardage through the air, the Dolphins’ running attack bailed them out. Running back Lamar Miller ran for 78 yards on 14 carries, while Tannehill added 48 yards on five attempts. If the Dolphins’ rushing offense continues to click they may find holes in a San Diego defense that struggled allowed Denver to run for 139 yards last week.

On the other side of the ball, the Dolphins pass rush remained in excellent form. They sacked the Jags’ rookie quarterback four times for a combined loss of 20 yards. Miami now have 21 sacks in the season (tied for ninth in the NFL). They should be able to penetrate San Diego’s offensive line, which allows 1.6 sacks per game. Defensive end Cameron Wake should lead the team in this regard after tallying 3.5 sacks in his past three games and a team-high 5.5 this year.

The Miami Dolphins are 1-2 SU/ATS at home this season and all three home games have gone over the total.

Phillip Rivers and the Chargers (+1) bounce back from their two-game slump and hand the Dolphins a third-straight home loss.