At Top Bet we’re making sure you’re prepped for March Madness by breaking down the teams that will affect your bracket the most. We’ve looked at favorites like Duke, Florida, and Kansas, and are on to the teams that are long shots to win the NCAA Championship, but could nonetheless turn some heads this March: the sleepers. We started with the SMU Mustangs and are on to the Oklahoma State Cowboys.

[sc:NCAAB240banner ]Truth be told, Oklahoma State is among the biggest disappointments this season. The Cowboys will likely enter the NCAA National Tournament with an at-large-berth, having put up a 6-9 record in a Big-12 conference they were expected to challenge for. Could they be the dangerous team everyone thought they would be once they’re in the Big Dance?

Even though Marcus Smart is the go-to-guy of the Cowboys, other players are capable of taking over the offense as well. Oklahoma State has four players averaging 13 PPG or more including Smart (17.6 PPG), Markel Brown (16.9 PPG), Le’Bryan Nash (14.4 PPG), and Phil Forte III (13.2 PPG). 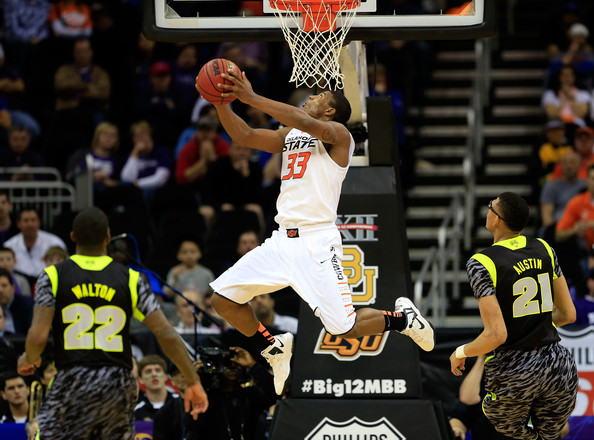 Despite a frustrating season in which he saw his NBA draft stock drop lower and lower, Smart is still the heart and soul of the Cowboys. His ability to score at will and his willingness to share the ball (his 4.7 APG is best in the team) makes him the kind of versatile threat that can be hard to plan for.

Michael Cobbins hurting his Achilles this season has been emblematic of the Cowboys struggles in general. In the 13 games he played in, Cobbins was the Cowboys’ anchor defensively, having led the team in blocks with 1.5 swats a game. Although Kamari Parker (1.3 BPG) has ably filled some of the gap, the Cowboys were left with another problem – depth.

Without Cobbins, Oklahoma State is forced to leave some of the duties inside to Leyton Hammonds, an untested and unreliable freshman who has struggled. He has one block in the 27 games he’s appeared in this season.

Scoring only a point in the first half, Marcus Smart went off for 20 points in the second half to rally the Cowboys to a 72-65 win over No. 5 Kansas on March 1. The win was huge for the Cowboys in terms of building their case for a higher seed in the national tournament.

Despite having gone on a successful run towards the end of the season, the Cowboys are considered a team on the bubble as they are being weighed down by a disastrous slump they suffered midway through conference play. Expect them to play their way to the third round and no further.

Get into the action and bet on college basketball with Top Bet, America’s best online sportsbook.