Despite a slow start to the season, the defending NFC champion Seattle Seahawks successfully clinched a postseason berth after a win versus Cleveland on Sunday. Now, the Seahawks will look to sustain their momentum and notch their sixth-straight win when they play host to the St. Louis Rams this weekend. Can they succeed in doing so? Or will the Rams shock them?

Read on below for a full analysis of this NFC West battle. And while you’re at it, check out our other Week 16 previews of the: Chargers vs. Raiders and Browns vs. Chiefs.

[sc:NFL240banner ]In what was likely their final game in the Edward Jones Stadium, the Rams made sure to give their beloved home crowd a fitting farewell gift with a 31-23 triumph at the expense of the visiting Bucs Thursday night. That win marked their second-straight and their sixth overall this season.

A testament to that victory was none other than Case Keenum, who delivered one of the best games of his professional career. He completed 14 of his 17 passes for a season-high of 234 yards with two touchdowns and no interceptions under his name.  Keenum will now try to replicate this performance when the Rams lock horns with their division rivals in the Seattle Seahawks.

That’ll be easier said than done though, as the Seahawks are the second-best defensive team in league—behind the Broncos—with just 302.2 total yards allowed per game. But nonetheless, Keenum and co. will take their chances and try to hopefully steal one from the defending NFC champions.

Key to the Rams’ success is obviously their rushing game that ranks sixth-best in the NFL with 122.9 yards per game. The responsibility falls on rookie Todd Gurley to lead the attack on the ground opposite a stout Seahawks front seven (83.9 yards allowed per game).

Gurley should be able at least to find some gaps as his agility and strength almost makes him impossible to stop. The rookie running back leads the team with 1,023 rushing yards and nine touchdowns throughout 12 games. Plus, there was even a stretch this season that Gurley had five-consecutive 100-yard games.

Meanwhile, Keenum could still resort to their passing game through the pair of Kenny Britt and Jared Cook if things don’t go smoothly in their ground plays. Both wideouts have combined for 1,027 receiving yards this year.

Betting on the Seattle Seahawks (9-5) 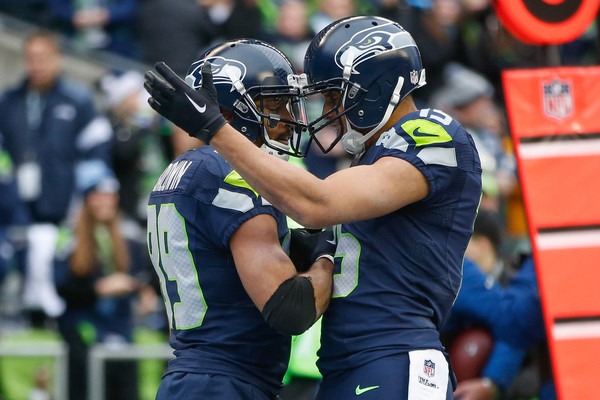 With a 30-13 win over the struggling Browns last Sunday, the Seattle Seahawks, who opened their 2015-16 campaign losing four of their first six games, are headed to the playoffs for the fourth-consecutive time this season. Russell Wilson made sure of this by providing another spectacular performance with 249 passing yards with three touchdowns—two to Doug Baldwin—and no picks.

That win also marked their fifth-straight and their sixth in 10 games. The Seahawks will look to stretch this unbeaten run further and gather all the momentum they can before the playoffs officially begin when they square off the visiting St. Louis Rams this weekend.

Wilson should be able to have another efficient outing as he’ll be going up against a Rams team that’s allowing 247.3 passing yards per contest. He’ll have the trio of sizzling wide receivers in Baldwin, Jermaine Kearse and Tyler Lockett to throw to.

Baldwin currently leads the team with 905 yards receiving on the season and has garnered an astonishing 10 touchdowns in the previous four games. Meanwhile, Kearse has gathered 14 receptions for 184 yards in the past two games and Lockett has 159 yards on 11 catches with three scores in the same stretch.

A reason for concern for the Seahawks, though, would be their rushing game that has been massively depleted with the injuries to Marshawn Lynch and Thomas Rawls. But they might have found a temporary answer to this problem through Christine Michael, who had a team-high 84 yards on 16 carries against Cleveland.

Seattle coasts to a 35-17 win. Create a betting account now and cash in on all the NFL regular season action.