The Atlanta Falcons responded with a win after earning their first loss of the season. They managed to edge out the Tennessee Titans, 10-7, on Sunday. They will look to make it back-to-back wins when they take on the Tampa Bay Buccaneers this coming Sunday in front of their home crowd at the Georgia Dome. Will the Falcons succeed in doing so? Or will the Bucs stun them with an upset?

Read on below for a detailed breakdown of this game. And while you’re at it, you can continue satisfying your football cravings with our other Week 8 previews: Jets at Raiders and Seahawks at Cowboys. Enjoy.

Betting on the Tampa Bay Buccaneers (2-4)

It’s not about how you start, it’s how you finish. This quote basically summarizes what happened during the Tampa Bay Buccaneers’ matchup with the Washington Redskins on Sunday. The Bucs had the lead almost the entire game and even held a 24-point advantage in the second quarter. They seemed to be on their way to a win until the second half began.

[sc:NFL240banner ] From that point on, the Bucs were held scoreless in third quarter and managed to rack up just six points—via two field goals—in the fourth quarter. Their defense also couldn’t provide the necessary stops down the stretch which allowed Kirk Cousins to deliver three second half touchdowns, including the game-winning touchdown to Jordan Reed with 24 seconds remaining on the clock.

This was surely a tough loss to swallow but the Bucs had some things to smile about. Jameis Winston, the No.1 overall pick of this year’s draft, was phenomenal in this one, completing 21 of his 29 passes for 297 yards and a pair of touchdowns in the first half. Winston also finally formed a solid connection with Mike Evans, who had a season-high 164 receiving yards on eight catches with a touchdown.

The Bucs will be hoping on both Winston and Evans to carry that momentum come Week 8. They ought to feel pretty confident about going up against the Atlanta Falcons, who are currently among the 10 worst teams in the league when it comes to defending against the air (7.0 yards allowed per reception).

As for the defense, the pressure is going to be on the Bucs’ defense to hold off Atlanta’s all-around offensive game that’s averaging 403.1 total yards, the fifth-highest in the NFL this season.

Betting on the Atlanta Falcons (6-1) 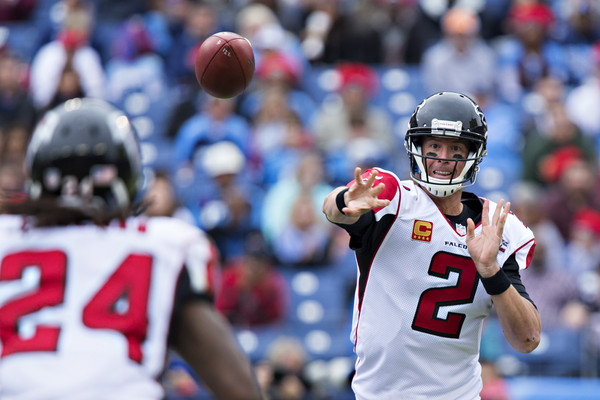 After suffering their first loss of the season, the Atlanta Falcons immediately reverted back to their winning ways at the expense of the Tennessee Titans, 10-7. It wasn’t a pretty win but the Falcons, who outgained their opponents 378-256, will take it nonetheless. They are now 6-1 on the season and are behind the undefeated Carolina Panthers in the NFC South.

Matt Ryan threw for 251 yards along with a touchdown pass and Devonta Freeman contributed 116 yards on 25 carries to help his team fend off the resilient Titans. Julio Jones also made his presence felt as always, leading the air attack with 92 yards on nine catches and a score under his name.

Atlanta, though, only scored 10 points in this game which is a season-low. Their offense has yet to regain its rhythm back despite capturing the win. They’ll be hoping to finally do so when they lock horns with the visiting Tampa Bay Buccaneers for their Week 8 clash this weekend.

For them to succeed in this game, the Falcons need to take advantage of the Bucs’ shaky secondary that’s yielding 219.5 passing yards per contest this year, the fifth-highest in the league. That said, expect Jones and Freeman to have another promising output.

Jones owns a team-high 730 yards on 58 receptions with five touchdowns across six games. Meanwhile, Freeman’s ability to rumble and catch the ball has been such a formidable asset for him and the Falcons. He’s averaging 4.7 yards per carry and 9.1 yards per catch in the same stretch.

Create a betting account now and cash in on all the riveting NFL regular season action.