As crazy as it sounds, the Thursday night matchup between the 2-7 Tennessee Titans and 3-6 Jacksonville Jaguars has serious AFC South title implications. The Jags are still very much in contention for the division crown after beating the Baltimore Ravens on a last-gasp field goal. Can they keep pace with the division-leading Colts by taking care of the Tennessee Titans, who have struggled to put points on the board this season?

Get a full breakdown of this Thursday night AFC South showdown below. Meanwhile, check out Sunday’s top NFL action with our previews of the Colts vs. Falcons and Packers vs. Vikings.

Betting on the Tennessee Titans (2-7)

After enjoying an offensive explosion in their 34-28 road win over the New Orleans Saints, the Tennessee Titans offense returned to its ineffectual ways in a 27-10 home loss to the still-undefeated Carolina Panthers. The Titans couldn’t cover the 3.5-point spread as home underdogs, and dropped to 3-6 ATS this season.

[sc:NFL240banner ]Rookie Marcus Mariota coughed up three more turnovers (one interception, two fumbles) as he went just 16-of-24 for 185 passing yards. Meanwhile, the Titans running game once again couldn’t get anything going on the ground, garnering just 64 yards on 21 carries.

The Titans offense, which is averaging just 18.8 points per game this season, is severely short of weapons at the skill positions. They were already missing top wide receiver Kendall Wright for the past two games with a sprained knee, and will now be without Justin Hunter after he suffered a broken ankle against the Panthers.

They still have tight end Delanie Walker, though. Walker was instrumental in their big win over New Orleans – he had 95 yards and two touchdowns – and could be set for another huge night against a Jags defense that has historically struggled covering tight ends. The Jags are 29th in the league in defending against tight ends this season, per Football Outsiders.

The Titans defense isn’t particularly great, but it can do one thing very well: rush the passer. They’re No. 2 behind the Broncos in terms of adjusted sack rate this season. Blake Bortles is an easy target behind that ineffectual Jags O-line, which should help the Titans shut down that dangerous passing game.

Betting on the Jacksonville Jaguars (3-6) 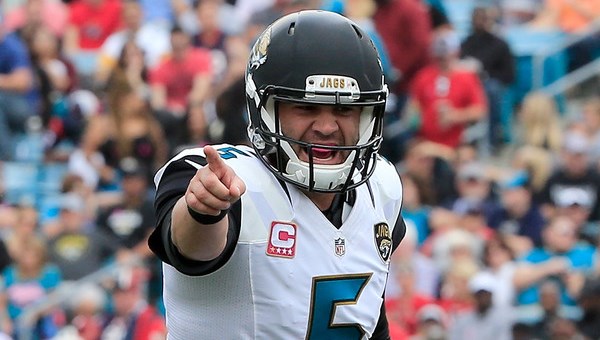 The Jacksonville Jaguars were pretty fortunate to beat the Baltimore Ravens. A face mask penalty on Blake Bortles helped them get into field goal position, which allowed Jason Myers to kick the game-winning 53-yard field goal with no time remaining. The Jags still would’ve covered even without the field goal, though, and are now 3-0 ATS in their last three games. However, all three have been as underdogs.

Bortles and the Jags offense struggled all day long. The second-year quarterback completed just 49 percent of his passes, and was sacked four times. Meanwhile, rookie running back T.J. Yeldon could only garner 3.4 yards per carry for 61 rushing yards.

The Jags’ top receivers, Allen Hurns and Allen Robinson, remained pretty reliable, though. Both caught touchdowns to give them 14 this year, second only to the Pats’ Julian Edelman and Rob Gronkowsi for the most receiving TDs by a pair of teammates. Hurns extended his impressive run to seven consecutive games with a touchdown catch.

The Titans’ secondary is still all sorts of banged up, with top corner Jason McCourty possibly done for the year with his groin problems and Perrish Cox battling a hamstring issue. Their continued absence should give the two Allens ample opportunity to do some damage.

Meanwhile, the Jags defense isn’t what you’d call “great” or even “good,” but it should be able hold its own against a Titans offense that has been unable to do much of anything well this season.

The Jaguars are 3-1 (3-0-1 ATS) in their last four home games against the Titans and 7-1-1 ATS in their last nine meetings overall. Meanwhile, the under has gone 7-1 in their last eight meetings at Jacksonville.

Bortles outduels Mariota and leads the Jags (-3) to a 27-21 home win over the Titans.