Will the Syracuse Orange win the 2014 College Basketball Championship?

This season, the Orange debuted as a member of the ACC and judging by the look of how things have gone so far for the team, it’s not far-fetched to think that they will make back-to-back Final Four appearances.

[sc:NCAAB240banner ]As of this writing, the Orange are still undefeated with a 20-0 SU record – one of the only remaining three teams to go this far with an unblemished overall record. Syracuse was seeded No. 8 in the preseason but mainly due to their undefeated streak, are now ranked No. 2, just behind Arizona.

We know there’s plenty of basketball left with the Big Dance still a full month away, but the way Syracuse is trampling one opponent after another,   it’s tough to avoid the question of whether they can win the national championship at Arlington in April. As of now, Syracuse is labelled as +600 to win it all.

If Syracuse will become the last team standing in the NCAA Tournament, then the following factors are some of the most likely reasons why.

If you look up the word defense on a Webster, there’s a big chance that you’ll see a picture of coach Boeheim beside it. Syracuse has long been known as a defense-first squad and this season is no exception. The Orange often employ their trademark 2-3 zone defense and as a result, the Orange are 5th this season in scoring defense (57.8 PPG). They are also allowing only 48.2 shots a game to opponents, ranked 6th in the nation. 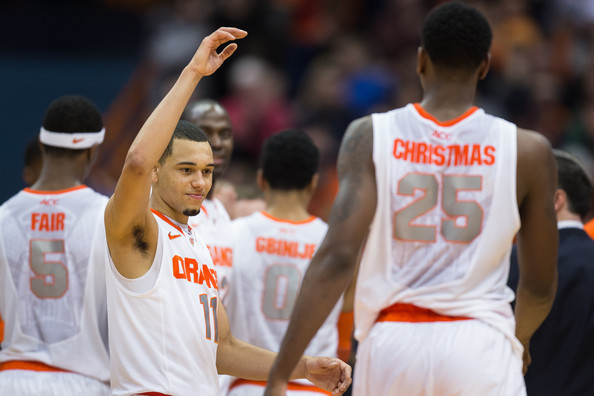 The Orange have a good mix of freshmen and experienced upperclassmen. Syracuse has five freshmen and among them is Tyler Ennis. Ennis is one of the nation’s top freshmen with some even putting him ahead of Duke’s Jabari Parker as the best of them all. The standout freshman is averaging 12.3 PPG, 3.4 RPG, and   5.4 APG. Along with them are four seniors whose deep tournament experiences from last year would come in handy come March Madness. That group includes C.J. Fair, who forewent joining the NBA draft to play one more for coach Boeheim. Fair is the team’s leader in scoring with 16.7 PPG. He is priced +1,800 to win the John. R. Wooden award.

Do you believe that the Syracuse Orange will win the 2013-2014 NCAA National Title? See the latest odds and lines of Syracuse’s games at Top Bet’s sportsbook.