There’s just no stopping Alabama right now. The Crimson Tide extended their winning streak to eight games with an emphatic 50-point victory over Charleston Southern on Saturday. The Crimson Tide will look to clinch the SEC West this coming Saturday when they take on the Auburn Tigers in the 80th edition of the Iron Bowl.

Who will emerge victorious in this much-anticipated rivalry game? Read on below for an in-depth breakdown of this college football matchup and while you’re at it, you can check out our previews of Ohio State vs. Michigan and Notre Dame vs. Stanford.

Alabama bolstered its College Football Playoff resume with a resounding 56-6 victory over Charleston Southern on Saturday. Cyrus Jones and Derrick Henry each scored a pair of touchdowns to lead the Crimson Tide to their eighth consecutive win. It was a memorable afternoon, particularly for Jones, who produced a stellar display in his final home game. He scored on returns of 43 and 72 yards to become the only player in Alabama’s rich history to score twice on punt returns.

[sc:NCAA240banner ]The Crimson Tide will look to keep the momentum going this coming Saturday when they face arch-rivals Auburn at Jordan-Hare Stadium. For Alabama to grab the important victory, it needs to continue its excellent play on the defensive end. The Crimson Tide are third in the FBS in scoring defense, allowing just 14.5 points per game this season.

They displayed that defensive prowess in their last game against the Buccaneers, limiting the FCS juggernaut to just six points and 134 total yards. The reigning SEC champions will be licking their chops at the prospect of facing an Auburn side that has struggled mightily on the offensive end this year. The Tigers are averaging just 28.5 points per game this season, 69th in the entire FBS.

Alabama will also take comfort in the fact that it has fared extremely well against Auburn of late. The Crimson Tide have won three of their last four games against the Tigers, including last year’s 55-44 victory at Bryant-Denny Stadium. It’s interesting to note that the total has gone over in their last four meetings, so we can expect another high-scoring affair this coming weekend.

The Crimson Tide are 3-0 SU and ATS on the road this season. 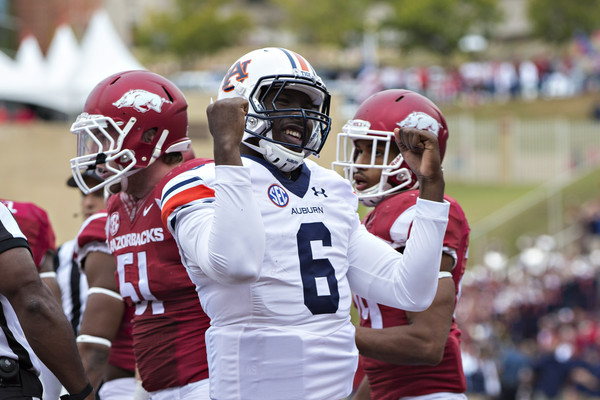 Auburn returned to winning ways Saturday with an emphatic 56-34 victory over Idaho at Jordan-Hare Stadium. It was a huge bounce-back win for the Tigers, who suffered a gut-wrenching 20-13 defeat to Georgia this past weekend. With the victory, the Tigers improved their overall record this season to 6-5 and in the process gained bowl eligibility this campaign.

They can further boost their bowl credentials this coming Saturday when they face top-ranked Alabama in another mouth-watering clash. For the Tigers to record a major shock, they will need to get another huge game from their prolific rushing offense. The Tigers wreaked havoc on the ground on Saturday, rushing for a total of 297 yards, their second-highest mark this season. The Tigers have now eclipsed 200 yards rushing in their last three outings. Jovon Robinson was spectacular for Auburn in this contest, rushing for 99 yards and a touchdown on 15 carries.

It’s also crucial for the Tigers that they continue their excellent play in the red zone. Auburn converted all six of its red-zone opportunities in the game against Idaho. They will need that same kind of efficiency to unlock an Alabama side that is third in the FBS in total defense, allowing just 265.0 yards per game this season.

The onus then is on Jeremy Johnson to decode such a great defensive side.  What makes Johnson such a fantastic quarterback is his excellent dual-threat ways. He threw for two touchdowns and ran for two more scores in the win against the Vandals.