After delivering one of the worst beatdowns of the week, the Atlanta Falcons are making their way to Minnesota for Week 4 of the 2014 NFL regular season. In the meantime, the Vikings need to adjust to life without Adrian Peterson fast if they wish to avoid a third-straight loss. Will the Falcons have another dominant win? Or will the Vikings find their stride without their No. 1 running back? Read on as we breakdown the action to come.

While you’re at it, you can also check out our preview for Thursday Night Football’s New York Giants vs. Washington Redskins or Sunday night’s intriguing Saints vs. Cowboys tilt.

The Atlanta Falcons are coming off a masterful performance in a 56-14 rout of the reeling Tampa Bay Buccaneers on Thursday night. The Falcons are now 4-1 ATS in their last five regular season games dating back to last year.

[sc:NFL240banner ]Matt Ryan finished the game 21 of 24 with 286 yards and three touchdowns. The Atlanta quarterback comes up against a Minnesota pass defense that has only allowed three scores against them this season.

Julio Jones had nine catches for 161 yards and two touchdowns against Tampa Bay, while Hester also had a big game with two touchdowns from a 20-yard run and a 62-yard punt return. The return touchdown was Hester’s 20th in his career, setting a new NFL record. And with Roddy White also set to return after sitting out against Tampa Bay with a hamstring issue, the Falcons will have their full passing arsenal available, which should make room for their running game.

With Minnesota’s defense preoccupied with the pass, running backs Steven Jackson and Antone Smith will have enough space for crucial rush attempts. The two running backs combined for 104 yards on 28 carries and two touchdowns on Thursday.

Defensively, the Falcons can hold their own, especially with the Vikings’ starting quarterback Matt Cassell injured and rookie Teddy Bridgewater taking over the reins. Knowing that, the Falcons should establish their pass rush early to rattle the young quarterback. The Falcons’ defensive line delivered three sacks against Tampa Bay.

The Atlanta Falcons are 3-1-1 ATS in their last five games against NFC North teams dating back to October 2011.

Create a betting account now and cash in on all the football action. 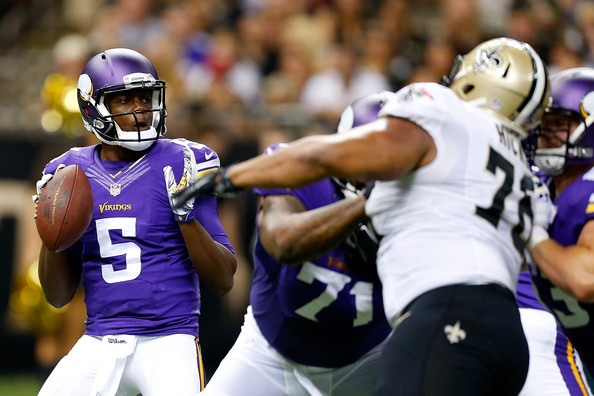 The Minnesota Vikings aren’t the same without Adrian Peterson. They have run for just 113 yards on 41 carries in two games without their premier running back. The Peterson-less Vikings are 0-2 straight up and agaisnt the spread in their last two games.

Heading into their Sunday showdown against Atlanta, it doesn’t look like their problematic rushing situation will end soon. Peterson may sit out the rest of the season as his legal situation may not be resolved until the end of the year. Meanwhile, tight end Kyle Rudolph and right guard Brandon Fusco may be out due to groin and pectoral injuries, respectively. Both are vital for the Vikings’ blocking scheme. If they can’t return against the Falcons, it’s going to be another long night for Minnesota on the ground.

To further compound problems for the Vikings, their passing offense isn’t much better. Matt Cassel only completed 5-of-10 passes for 53 yards before getting injured against New England, while his replacement Teddy Bridgewater went 12-for-20 for 150 yards but was sacked twice. Bridgewater will have a tough assignment for his first pro start as he goes against a confident Atlanta defense which allowed just a total of 217 yards while forcing five turnovers against Tampa Bay.

Still, if the Vikings can open up on their passing game, then targeting No. 2 receiver Cordarrelle Patterson may give them some success. Patterson hasn’t seen much passes going his way in the past two games, but he still leads the team with seven receptions for 82 yards. He has also contributed out of the backfield with 102 yards and a score on just three carries.

Getting Patterson some space to make plays would be wise for Bridgewater, who could use the distraction to get comfortable making throws and demonstrate his ability to grab first downs with his legs – something he did twice in Week 2.

The total has gone under in four of Minnesota’s last five games against the Falcons.

The Atlanta Falcons will be brimming with confidence ahead of their visit to TCF Bank Stadium. The Falcons (-3) win and cover with ease as the Vikings continue struggling.