Don’t count No. 7 Baylor out just yet. The Bears claimed a big road win over a previously unbeaten Oklahoma State to put themselves right back in the Big 12 title race – and the College Football Playoff picture. The Bears could be down to their third-string quarterback, who would make his first-ever start on the road against No. 15 TCU. Can the Horned Frogs exact revenge for their lone loss from last season and end Baylor’s playoff hopes once and for all?

Read on for our preview of this massive Big 12 matchup. And for more of Rivalry Week’s top matchups, check out our previews of Oklahoma State vs. Oklahoma and Ohio State vs. Michigan.

[sc:NCAA240banner ]Talk about gutsy wins. Baylor, who already lost No. 1 quarterback Seth Russell for the year with a scary neck injury, had to deal with the loss of yet another QB against Oklahoma State as freshman Jarrett Stidham had to depart. But the Bears just had too many weapons on offense, and came away 45-35 winners in Stillwater.

Third-string quarterback Chris Johnson came to Baylor’s rescue with two second half touchdowns in relief of Stidham. Meanwhile, the running game gashed the Cowboys all night long to the tune of 304 rushing yards.

Stidham, who is now dealing with hand, ankle and back injuries, is a pretty significant doubt to recover in time for Friday night against TCU. But even if Stidham can’t go, Johnson has proven that he’s pretty capable of stepping up and operating Baylor’s high-powered offense. Having arguably the best receiving corps in the country (Corey Coleman, KD Cannon, Jay Lee, etc.) should also ease the pressure on the sophomore.

Star running back Shock Linwood is also a doubt to play because of knee and ankle issues. But with Johnson, who’s pretty useful with his legs, Johnny Jefferson and Devin Chafin, Baylor should still have enough weapons on the ground. The three combined for 164 rushing yards and two touchdowns against Oklahoma State.

Don’t sleep on the Baylor defense making a big difference, too. The Bears D was simply magnificent against Oklahoma State. They got a ton of pressure on Mason Rudolph, and ended up with five sacks. They also allowed just 37 rushing yards to the Cowboys’ non-quarterback runners.

Look for Baylor to keep running back Aaron Green – TCU’s biggest skill position threat with Josh Doctson injured – in check on the ground. And even if Trevone Boykin is able to play, the Bears can bring the pressure and keep Bokyin – or whomever the Horned Frogs have at QB – out of sync all night. 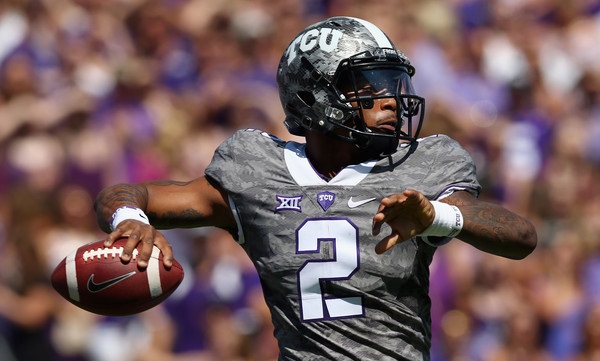 TCU may be out of the playoff and conference races, but the Horned Frogs are not going down without a fight. They could’ve given up after falling behind to Oklahoma by 17 in the third quarter. But even without star quarterback Trevone Boykin and receiver Josh Doctson, they scored 16 unanswered points in the fourth quarter and came within a two-point conversion of the incredible comeback.

Boykin could make his return from an injured ankle against Baylor, and his presence would obviously be a significant upgrade over backups Bran Kohlhausen and Foster Sawyer. Boykin, a senior, is a very experienced quarterback and will likely be going up against a highly inexperienced third-string QB in Johnson, who will be making his first ever start. That has to be enough to give the Horned Frogs a fighting chance, especially at home.

Doctson, the real game changer in the TCU offense, will miss the rest of the season with a wrist injury, but Boykin still has some capable weapons in seniors Aaron Green and Kolby Listenbee. Listenbee was the team’s top receiver with 98 yards and a touchdown against Oklahoma. He had a team-high 146 yards and caught Boykin’s lone touchdown pass in last year’s 61-58 loss to Baylor.

The more pressing question is whether TCU’s defense can cause any problems for Johnson. It certainly gave Oklahoma’s backup QB Trevor Knight a few problems after Baker Mayfield went off with an injury. However, it wasn’t that long ago that the Horned Frogs were burned for big play after big play by Oklahoma State in a 49-29 loss.

TCU is just 4-4 in eight meetings all-time against Baylor, but is 7-1 ATS.

Boykin manages to keep TCU in the game, but Baylor has too many weapons and edges past the Horned Frogs, 34-31.