The Carolina Panthers are two wins away from perfection. The runaway NFC South leaders threw away a 28-point lead against the New York Giants, but recovered in time to become just the fourth team in NFL history to reach the 14-0 mark. Their road to 15-0 will have to go through Atlanta, as the they pay the division rival Falcons a visit.

The Falcons finally put an end to their free-fall on Sunday as they beat the Jacksonville Jaguars. With an NFC wild-card spot still within the realm of possibility, can the Falcons pull off the shock win over the undefeated Panthers?

Read on below for a complete breakdown of this classic NFC South showdown. Meanwhile, check out more intriguing intra-division Week 16 action with our previews of the Rams vs. Seahawks and Patriots vs. Jets.

Betting on the Carolina Panthers (14-0)

For seven of the last eight quarters they’ve played, the Carolina Panthers have looked every bit like the undefeated juggernaut that has impressed for much of the season. They shut out the Atlanta Falcons, 38-0, at home and were winning 35-7 on the road against the New York Giants on Sunday.

[sc:NFL240banner ]However, the Panthers celebrated a bit prematurely with over a quarter to go as they allowed the Giants to come all the way back to tie the game. Thankfully, Cam Newton was on hand to lead the game-winning field goal drive in a 38-35 victory.

After that slight scare, and a shot at a historic perfect regular season well within reach, expect Carolina to come with a more sustained effort at Atlanta.

Newton was in MVP-caliber form against the Giants, with 340 yards and five passing touchdowns – his third five-TD performance in his last five games – as well as a season-high 100 yards rushing. He had only three touchdowns against Atlanta a couple weeks ago, but did record his highest QB rating of the year (153.3) against a flimsy Falcons D.

The Panthers are averaging 38.8 points per game over their last five games, and with the way Newton has been playing, the offense should be able to continue rolling at Atlanta.The Panthers have pounded the Falcons by a total score of 72-3 in their last two meetings.

Carolina is 5-1 SU and ATS in its last six meetings with the Falcons, and has won the last two visits to Atlanta.

Betting on the Atlanta Falcons (7-7) 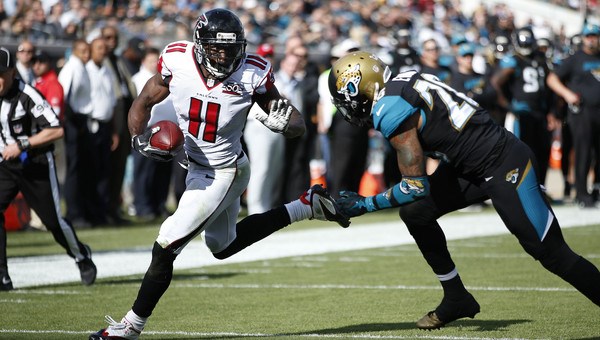 The streak is over. After six-straight losses, the Atlanta Falcons finally got back on the win column with a 23-17 win over the Jacksonville Jaguars. Julio Jones led the way with nine catches for 118 yards (his first 100-yard game in a month) and a touchdown (his first since November 1st). Devonta Freeman also rushed for his first score since way back in Week 6.

The win keeps the Falcons’ slim shot at the second NFC wild-card spot alive, but they still need to win both games and hope the Vikings lose their last two.

It’d be foolish to get too carried away about the Falcons offense being back to its best after just one decent outing. They had managed just 14 points per game during their six-game losing skid, and laid a big fat egg against the Panthers at Carolina earlier this month.

However, it should give them at least some hope that the Panthers have faltered defensively away from home recently, giving up 38 and 35 points in their last two road games. The Falcons have the explosive weapons in Jones – the league’s second-leading receiver – and Freeman to do some damage should the Panthers take their foot off the gas again.

The Falcons, though, have been an unreliable home team this season. After winning their first three games, they’ve lost their next three, and have also gone 0-4 ATS in their last four.

The Panthers (-7) don’t let up again as they deliver another beatdown on the Falcons, 35-14.