The New England Patriots keep losing players, yet they keep winning games. Despite a couple more additions to their already very long injury list, the Patriots still took care of the Tennessee Titans with relative ease to secure a first-round bye in the AFC playoffs.

The New York Jets won’t be quite as easy to beat, though. The Jets, who have won four in a row, are looking quite impressive on both sides of the ball and still have a wild-card spot to chase when they host their fierce division rivals on Sunday.

Get a full breakdown of this AFC East matchup with our preview below. Also, don’t forget to check out more Week 16 matchups with our previews of the Giants vs. Vikings and Browns vs. Chiefs.

Betting on the New England Patriots (12-2)

Despite a run-of-the-mill 33-16 win at home against the terrible Tennessee Titans, the snake-bitten Patriots were hardly left unscathed as another batch of key personnel fell to injury.

[sc:NFL240banner ]Wideout Danny Amendola left the game in the first half due to a knee injury, linebacker Dont’a Hightower injured his knee in the second half, while safety Patrick Chung suffered a hip injury. All three didn’t return. However, it speaks to the Pats’ incredible “next man up” mentality that they were still able to function at a high level even with all their injury problems.

It also speaks to Tom Brady’s brilliance that was still able to put up some very decent numbers (23-of-35, 267 yards and two touchdowns) even after battling an illness last week and having his offensive weapons reduced to Rob Gronkowski, Brandon LaFell, James White, and Joey Iosefa.

As long as Brady and Gronk, who had 11 catches and 108 yards with a touchdown in their first meeting with the Jets this season, are still standing, the Pats offense should remain very formidable on the road.

Don’t sleep on the Pats offense from making some key plays to help Brady as well. The unit has allowed just 22 total points over the last two games, with 10 sacks and two interceptions. 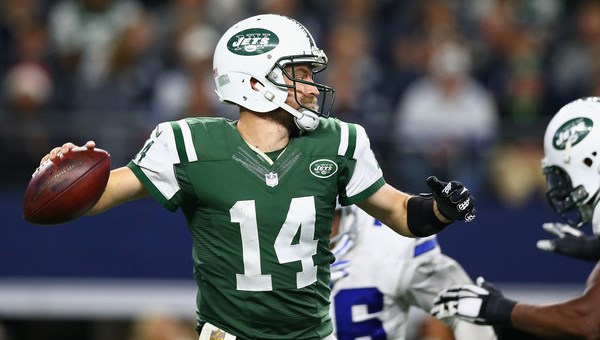 The Jets’ recent offensive hot streak came to an end on Thursday night as they were kept in check by the Dallas Cowboys in Jerry World. However, the Jets did just enough in the fourth quarter to come away with a 19-16 win, their fourth victory in a row.

Ryan Fitzpatrick (26-of-39, 299 yards, one TD, one INT) threw his first pick in about a month, but made some clutch plays for the second time in three weeks to lead his team to victory. Fitzpatrick has been terrific in recent weeks, in large part because he has the hottest receiving combination in Brandon Marshall and Eric Decker (21 combined touchdowns this season) to throw to.

The Jets haven’t been as effective running the ball as they were earlier in the season, but the combination of Marshall and Decker should be able to help the offense put some much-needed points on the board against a stingy Pats defense. The Jets are averaging 27.5 points in their last four games.

The defense, after going through a rough patch from Weeks 7-11, has also played very well, giving up just 16 points in their last four games. The Jets, who are No. 1 in the league in run defense per DVOA, should be able to stuff the Pats quite comfortably on the ground and concentrate more on the pass.

The Pats’ Julian Edelman and Danny Amendola, who combined for 13 catches and 140 yards against the Jets in their first meeting this season, could both be out in this matchup, which should help ease the pressure on the Jets secondary in covering the Pats’ deadly short-to-intermediate passing game.

The Jets (+3.5) have the tools on both sides of the ball to capitalize on the Pats’ injuries problems. New York wins, 27-24.