The Minnesota Vikings are on fire lately as they are currently on a four-game winning streak. They’ll try to extend their unbeaten run to five games versus the Oakland Raiders at O.co Coliseum this coming Sunday. Can the Vikings succeed in doing so? Or will the Raiders extinguish their flame?

Read on further for a comprehensive breakdown of this clash. And while you’re at it, check out our other NFL Week 10 previews: Jaguars vs. Ravens and Saints vs. Redskins.

Betting on the Minnesota Vikings (6-2)

[sc:NFL240banner ]The Minnesota Vikings earned their fourth-consecutive victory on Sunday night against the Rams but they paid dearly for it. They lost their quarterback, Teddy Bridgewater, who was knocked out by Lamarcus Joyner late in the fourth quarter. The Vikings didn’t panic, though, as they maintained their composure to come up with the 21-18 overtime victory.

RB Adrian Peterson led the way with 125 yards rushing with a touchdown and helped set up Blair Walsh’s 40-yard field goal conversion in overtime to seal the win for them. The Vikings have now improved to 6-2 overall and are tied with Green Bay in their division race. They’ll be hoping to extend their unbeaten run further when they go on the road to lock horns with the Oakland Raiders for their Week 10 matchup.

For them to pull off another win, they would be smart to increase their passing plays against a Raiders’ secondary that’s surrendering a league-high of 314.6 yards per game. That said, Stefon Diggs could have a huge game in this one. Diggs currently leads the team with 419 yards receiving with two touchdowns. But he had a pretty quiet night against the Rams, hauling in just three catches for 42 yards.

Of course, the Vikings could always rely on their formidable rushing game—that averages 132.8 yards per games this season—if Diggs struggles. Peterson will definitely get his touches as he attempts to build on his most recent performance. Through seven games, he has rumbled for 633 yards and has three touch downs.

Also, if Bridgewater fails to suit up for next week, expect backup Shaun Hill to get the start behind center. Hill threw for 15 yards and was sacked once after replacing Bridgewater in the fourth quarter versus St. Louis.

Betting on the Oakland Raiders (4-4) 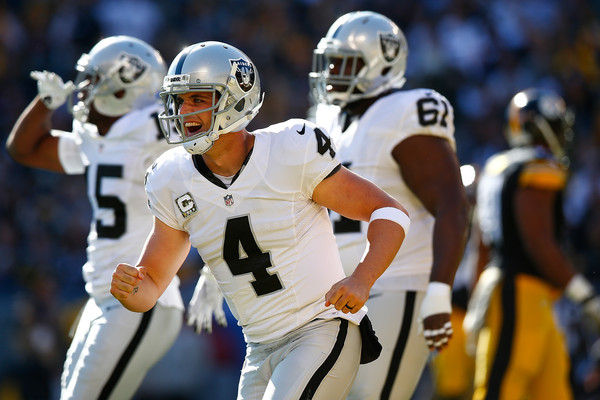 The Oakland Raiders were so close to hitting the halfway mark of the season over .500 for the first time in 14 years. They couldn’t do it, however, as the Steelers managed to slip past them, 38-35, on Sunday. That loss ended their two-game winning streak and handed them their fourth loss of the season. The Raiders will now look to put themselves back on track against the visiting Vikings for their Week 10 bout.

It’ll be easier said done though, since the Vikings are regarded as one of the best defensive teams in the NFL this season with only 332.2 total yards allowed per game. They’ve been even-deadlier in defending against the air game (6.9 yards allowed per reception). That said, Derek Carr and company will have to be on their best form.

Carr is coming off two-consecutive games with at least 300 passing yards and four touchdowns in their loss to Pittsburgh. He’ll definitely be attempting to keep his flame burning for as long as possible. For that to happen, the pair of Latavius Murray and Amari Cooper needs to also continue on delivering the goods.

Murray carried the ball 17 times for a team-high of 96 yards before being forced to leave the game in fourth quarter after getting hit hard on the head. His status for next week is questionable and it’ll be a huge blow for the Raiders without their No. 1 running back. Cooper, on the other hand, had his own solid output in the same game, catching seven passes for 88 yards. He also has a team-high 564 yards receiving with three TDs throughout seven games this year.

As for the defense, the onus is on Malcolm Smith, who’s gotten a total of  55 tackles across seven games, to lead the way in preventing Minnesota from finding any offensive rhythm.

The Vikings win but don’t cover the spread.