The San Diego Chargers just keep on rolling after dismantling the Jacksonville Jaguars 33-14 in Week 4. They will look to keep their three-game winning streak intact this coming Sunday when they face the reeling New York Jets. who have lost their last three games.

Who will win this vital Week 5 clash? Read on for our complete analysis of this matchup and while you’re at it, you can check out our preview of the Arizona vs. Denver game.

It’s still early in the season but alarm bells are starting to ring for the New York Jets after they lost to the Detroit Lions 24-17 on Sunday to drop their third game in a row.

[sc:NFL240banner ]It was the first time in Rex Ryan’s six years in charge of the Jets that they have started the season 1-3. The Jets were the owners of the second-best defense in the NFL prior to their showdown against Detroit, but they simply had no answer for quarterback Matthew Stafford and the rest of the Lions this time around.

Stafford completed 24 of 34 passes for 293 yards and two touchdowns but what made the defeat much worse for the Jets was that he did it with star wide receiver Calvin Jonson seeing limited action.

Instead, it was Lions wide receiver Golden Tate who had a field day with the Jets secondary, catching eight passes for 116 yards. The Jets allowed a total of 272 passing yards in the game and will need to step it up big time when they face the streaking San Diego Chargers this coming weekend.

What’s most concerning, however, for New York fans is the disappointing play of their starting quarterback Geno Smith. Smith completed just 17 of 33 passes for 209 yards including an 11-yard touchdown pass to Eric Decker but he also committed an interception and a fumble, driving his turnover total to seven in just four games.

Among starting quarterbacks, he is only 43rd in the passer rating department with a lowly 75.1 clip and it was not a complete surprise that some Jets fans were already chanting “We Want Vick!” during the game.

To be fair though, Smith was facing the second-best team in the NFL in terms of passing defense with the Lions allowing a stingy 186.5 passing yards per game. He will have a much easier time with the Chargers this coming Sunday although San Diego are still ninth-best in terms of total defense with opponents averaging just 325.5 yards against them through four games.

A worrying concern as well for the Jets is the way they were manhandled by the Lions in terms of possession. The Jets only had possession of the ball for 25 minutes and seven seconds as they had difficulty getting their running game going. They only had 132 rushing yards in the game against Detroit which was way below their season average of 151.2 which is the second-best mark in the NFL this year. 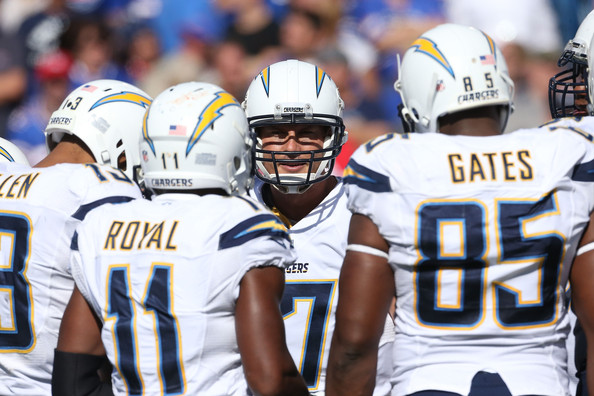 The San Diego Chargers rolled to their third consecutive victory on Sunday with a commanding 33-14 performance over the struggling Jacksonville Jaguars to improve their record to 3-1.

Quarterback Philip Rivers was just lights out, completing 29 of 39 passes for 377 yards and three touchdowns. Rivers’ had a 130 passer rating, breaking that very impressive mark for the second consecutive game following his 131.4 output a week ago against the Buffalo Bills.

Sharing the limelight with Rivers was wide receiver Eddie Royal. He had scoring catches of 47 and 43 yards as he recorded his second consecutive two-touchdown game. With Keenan Allen grabbing 10 catches for 135 receiving yards as well, the Chargers are now fourth-best in the NFL in the passing department with San Diego averaging 282.2 yards per game.

All of that will not be possible without the inspired play of Rivers who is the no. 1 quarterback right now in terms of passer rating with an incredible 114.5 clip. He will find the going much tougher this coming Sunday, though, as he will face a Jets team that is fourth-best in the NFL today in terms of total defense with New York allowing just 291.2 total yards per game this season.

Rivers will take note though, of how the Jets had difficulty dealing with Stafford and the rest of the Lion receivers in their last game. The Jets are currently 10th in the league in passing defense with opponents averaging 228.0 yards against them in their first four games.

The Chargers are 4-0 ATS this season.

The Chargers (-7) storm to their fourth win in a row.