The No. 17 Ole Miss Rebels are up to their old tricks with some solid defense this season. But they have another ace up their sleeves with a booming offense, which will surely be put to the test in a trip to SEC rival No. 2 Alabama. It’ll be a crucial showdown between the two teams and each of them are looking to get to a roaring start in conference play.

Are you craving for even more big games to come in college football? Don’t fret, as there’s another SEC showdown with No. 6 Auburn vs. No. 14 LSU in Week 3. There’s also another enormous matchup on tap as No. 15 Georgia Tech rolls into No. 9 Notre Dame (the full preview for that match can be found here).

Betting on the Ole Miss Rebels

Ole Miss was a defensive force last season, leading the nation in scoring defense with 16 points allowed per game. The Rebels’ defense seems to be as good this year after allowing a total of just 24 points through the first two games. But what make this team even more interesting is its two big blowout victories to start off the season.

The Rebels steamrolled over an overmatched UT-Martin team, 76-3, in the season opener, and then followed that up with a 73-21 victory against Fresno State. Junior quarterback Chad Kelly has been the star of the show, racking up a total of 457 yards passing with six touchdowns and just one interception through the first two games of the season. He also has two rushing scores.

[sc:NCAA240banner ]Kelly has plenty of weapons to choose from; Cody Core, Markell Pack, Quincy Adeboyejo and DaMarkus Lodge each scored a touchdown in Week 1. Adeboyejo seems to have separated himself from the rest of the pack after racking up 120 yards and three touchdowns on five receptions in Week 2. Kelly’s strong arm should come into play against Alabama’s passing defense, which has looked vulnerable after giving up a total of 417 yards passing through the first two games.

Surprisingly, the Rebels actually also have scoring threats on the other side of the ball. Defensive backs Trae Elston and Chief Brown each had a pick-six in the Week 2 victory over Fresno State. Elston now has a pick-six in each of his first two games of the season. Ole Miss will be ready to test Alabama’s senior quarterback Jake Coker, who has just seven career touchdown passes and two interceptions.

Ole Miss has lost its last five trips to Alabama, but has gone 4-1 against the spread.

Betting on the Alabama Crimson Tide 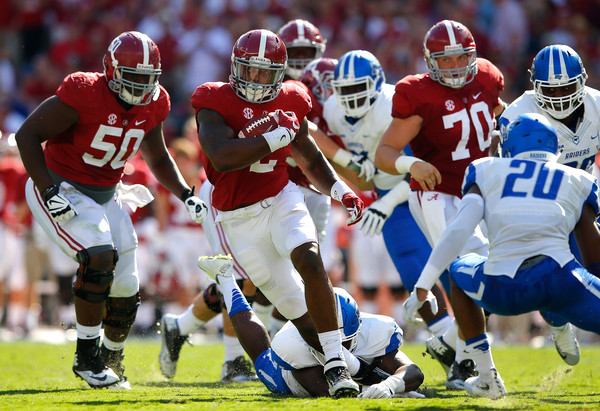 The Alabama Crimson Tide may have lost a handful of pieces in the offseason, but they’re still pretty solid with quarterback Jake Coker and running back Derrick Henry leading the way. Coker threw for 214 yards with a touchdown and an interception, all in the first half against Middle Tennessee. Henry, meanwhile, ran for 96 yards and three scores on 18 carries.

The Tide have yet to find a wide receiver to replace Amari Cooper, but they’ll make do with what they have in Robert Foster (two touchdowns this season) and Kenyan Drake (one TD), the only receiverswho have found the end zone this year. Ole Miss’ secondary is solid, but having Henry pounding the ball against a Rebels run defense that has allowed 100-yard games in each of their first two matchups this season should open up some of the passing lanes.

On the other side of the ball, Alabama should be able to turn up the pressure on Ole Miss quarterback Kelly. Jonathan Allen and Minkah Fitzpatrick have combined for three sacks this season. Stalling the their opponents’ passing offense should help the Tide aplenty, especially with Ole Miss seemingly not having a No. 1 option at running back. But Alabama should still be wary, as the Rebels’ running-back-by-committee game plan has put up 553 yards rushing and nine touchdowns through the first two games combined.

The Tide have won nine of their last 10 as the home team, but have gone just 5-5 ATS.

The Rebels deal a huge blow to Alabama’s bid for a second straight College Football Playoff spot with a cunning victory. Create a betting account now and don’t miss out on the biggest games in the college football season.