[sc:NHL250 ]Every games’ a must-win situation right now for both the Philadelphia Flyers and Detroit Red Wings with the postseason set to officially start next week. But of course only one winner can emerge when these two playoff-seeking teams go head-to-head for their regular-season finale tonight at the Joe Louis Arena. Who’s it going to be?

Read on below for more information about at this Eastern Conference showdown. And if you’re up for some MLB action as well, check out our preview of the Houston Astros versus New York Yankees.

[sc:NHL250 ]Philadelphia’s three-game run came to bitter end at the hands of Pittsburgh last weekend, 6-2.  In that game, the Flyers were quickly overpowered by the Penguins, who led from start to finish and had five players scoring at least one goal each.

That loss was also a pretty huge one for the Flyers, as a win could have pulled them into a tie with the Islanders for the first wild card spot in the Eastern Conference. But there’s no point in crying over spilled milk and Philadelphia should now be focusing on its next game opposite another familiar foe in the form of the Detroit Red Wings.

The Flyers should be feeling confident about this showdown, as they’ve managed to come out on top in the first two regular-season meetings with Detroit. And it’s safe to say that Claude Giroux and Michael Raffl will look to replicate their previous successes in this matchup.

Giroux, who leads Philadelphia in points (66) and assists (44) this season, has incurred a total of 16 points (six goals, 10 helpers) across13 career games opposite Detroit. Raffl, meanwhile, was huge in the previous meeting last month, during which he scored two goals to help the Flyers notch the thrilling 4-3 triumph.

On the defensive side, the Flyers pin their trust on Steve Mason to provide a valiant stand between the pipes. He allowed five goals on 38 shots in the game versus Pittsburgh, but Masons’ had his share of good moments against Detroit, owning a respectable 2.76 GAA and a .919 SV% across 25 career starts. 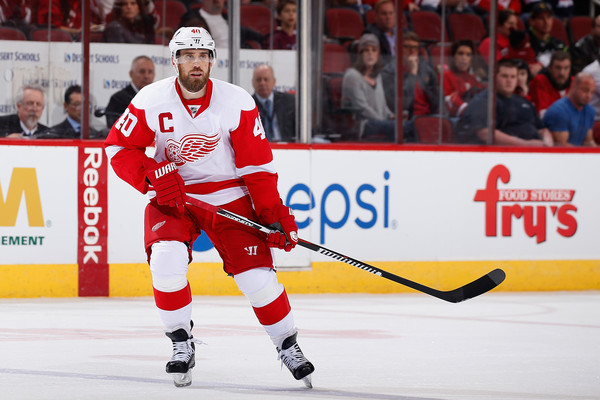 Other than the cheers of a jam-packed Joe Louis Arena crowd, the Red Wings can also look forward to having the momentum on their side as they enter this crucial contest as winners of back-to-back games opposite Minnesota and Toronto.

In the latter game, the Red Wings received two goals combined from the pair of Brad Richards and Mike Green, while goalkeeper Jimmy Howard made 32 saves for the team. That win allowed Detroit to finally overtake the Bruins for third place in the Atlantic Division with 91 points.

Now with three games left this season, the Red Wings will need to stay undefeated in order for them to clinch their 25th-straight appearance in the postseason. That being said, expect this team to play with a lot of aggression and intensity in tonight’s date with the visiting Philadelphia Flyers.

Look to none other than the pair of Pavel Datsyuk and Henrik Zetterberg to lead their attack from the get go. Both have accumulated 48 points apiece for the Red Wings and Zetterberg, in particular, should prove to be the one providing the most trouble to Philadelphia.

The 13-year veteran’s been scoreless in his previous nine games, but that drought could come to an end as he’s played really well across 40 home games this season. In that span, Zetterberg has gathered a total of 28 points (6 goals, 22 helpers).

Of course Dylan Larkin cannot be left unmentioned. He’s been having a sensational rookie campaign, racking up a team-best of 23 goals along with 22 assists. Larkin, however, is still scoreless in two games versus Philadelphia.

Create a betting account now and cash in on all the exciting NHL regular season action.