Despite missing the services of Ben Roethlisberger behind center, the Pittsburgh Steelers are doing relatively well, winning two of their last three games without their No. 1 quarterback. They’ll look to continue finding ways to win when they travel to Arrowhead Stadium for a date with the Jamaal Charles-less Kansas City Chiefs this coming Sunday. Will the Steelers notch another win? Or will the Chiefs finally put an end to their five-game slide?

Read on below for a detailed breakdown of this matchup. For more Week 7 game previews, you can click here for Raiders vs. Chargers and here for Buccaneers vs. Redskins. Enjoy.

Betting on the Pittsburgh Steelers (4-2)

Life’s been very different for the Pittsburgh Steelers with Ben Roethlisberger (knee) sidelined for the past couple of weeks. But fortunately, they’re getting by and are coming up with some big wins.

[sc:NFL240banner ]In their most recent game, the Steelers stunned many by pulling off the upset against the Arizona Cardinals on Sunday. They brought home the 25-13 triumph after rallying themselves back in the second half with a 12-0 burst in the third quarter that eventually helped them win the game.

A huge reason for this come-from-behind win was surprisingly the pair of third-string quarterback Landry Jones and the returning wide receiver Martavis Bryant, who missed first five weeks of the season due to suspension and injury.

Jones replaced Michael Vick during the second half after he sustained a right hamstring injury that forced him out of the game. Jones then threw a pair of touchdown passes to Bryant, which included an 88-yard catch-and-run to seal the game with less than two minutes on the clock. Bryant made sure to impress in his season debut as well by hauling in six catches for a team-high 137 yards.

With Roethlisberger still a long shot from returning and Vick’s status still up in the air for Week 7 against Kansas City, it wouldn’t be surprising to see Jones make his first ever career start in the league and also prove to the world that his previous efforts weren’t a fluke at all.

In order to do so, the logical strategy to take is by increasing their passing plays against an unstable Chiefs secondary which has had a tough time in locking up outside receivers, and is surrendering 276.7 yards per contest this year.

Then of course, the Steelers’ rushing game cannot be forgotten especially with star running back, Le’Veon Bell at the helm. Bell has been on a tear the past three weeks, rumbling for 328 yard with two scores. The Steelers went 2-1 during that stretch.

Betting on the Kansas City Chiefs (1-5) 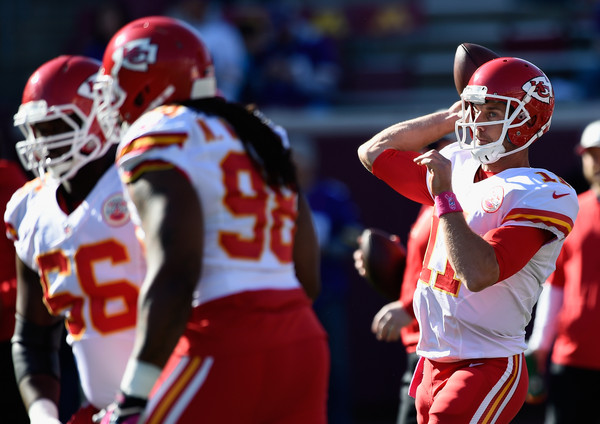 The Kansas City Chiefs experienced their first taste of life without Jamaal Charles on Sunday versus the Minnesota Vikings and the results were pretty much expected to say the least.

In that game, the Chiefs were held scoreless through three quarters and had just 51 yards in the first half. They only managed to finally rack up some points in the final period, during which they pulled themselves within three points thanks to Alex Smith’s 42-yard touchdown pass to Albert Wilson. But unfortunately their valiant effort just wasn’t enough, as the Vikings still held on to win the game, 16-10.

With the loss, Kansas City has now lost its past five games and is down at the bottom of the AFC West. They’ll have another chance to put an end to this struggle when the Pittsburgh Steelers pay them a visit this weekend for their Week 7 match.

It’s going to be fun to see how the Chiefs’ front seven, which is allowing just 3.6 yards per carry (seventh in the league), opposing the Steelers’ formidable ground game that generates 123.8 yards per contest thus far this season.

But needless to say, Charles’ absence makes the Chiefs offense look really weak. The pressure is on Charcandrick West to fill in the void. West did not impress at all in his first start as the replacement of the injured star running back, garnering just 31 yards on seven receptions. He needs to have a better outing in order to make things interesting down the stretch.

If West still can’t find a rhythm, expect head coach Andy Reid to give his other option in Knile Davis a bigger share of minutes and a chance to be the answer for their depleted backfield. Davis had just 13 yards on five carries versus Minnesota.

The Chiefs continue to struggle on offense as the Steelers ride on another solid performance from Jones for another victory.