Another intriguing Week 3 showdown is bound to set the roof on fire this coming Sunday, as the San Francisco 49ers (1-1) hope to avenge their lopsided 43-18 loss to the Pittsburgh Steelers when they pay the Carson Palmer-led Arizona Cardinals (2-0) a visit at the University of Phoenix Stadium. Which team will emerge with the win? Will the Niners bounce back? Or will the Cardinals make it 3-0 to start the 2015 season? Read on below for more about this NFC West matchup.

For more Week 3 game previews, you can click here for Bengals vs. Ravens and here for Chiefs vs. Packers.

After an impressive 20-3 win in their season-opener opposite the Minnesota Vikings, the San Francisco 49ers were sent back down to earth by the Pittsburgh Steelers, who handed them their first loss of the year in Week 2, 43-18.

[sc:NFL240banner ]The Niners were completely dominated by the Steelers’ fearsome offensive game which was headed by the pair of QB Ben Roethlisberger and WR Antonio Brown. Roethlisberger finished the game 21-of-27 for 369 yards with three scores to his name. Brown, meanwhile, had another solid outing as he caught nine passes for 195 yards with a seven-yard touchdown to help his team earn its first victory of their 2015 campaign.

San Francisco’s quarterback Colin Kaepernick still managed to have a performance worth noting though. Kaepernick completed 33 of his 46 passes for 335 yards with two touchdowns despite being sacked five times by a pesky Pittsburgh secondary. Then, there was wide receiver Torrey Smith, who also had a pretty solid effort of his own, garnering six receptions for a total of 120 and a touchdown added to his name.

Fortunately, the 49ers have a good chance on bouncing back from this loss when they lock horns with the Arizona Cardinals—a team that yielded 368.2 total yards per contest last season—for their Week 3 showdown this coming Sunday.

Expect San Francisco to capitalize on their formidable rushing game which currently ranks second the NFL with 170.5 rushing yards per contest.

Looking to lead the way will be their rising star in running back Carlos Hyde. The second-year back will be striving to find the groove he had during their season-opener against the Vikings, wherein he rumbled for 168 rushing yards and two touchdowns. Also, Smith will hope to build on his Week 2 performance with another notable performance at the expense of Arizona’s seconday, which has given up an average of 290.0 passing yards in their first two games this season. 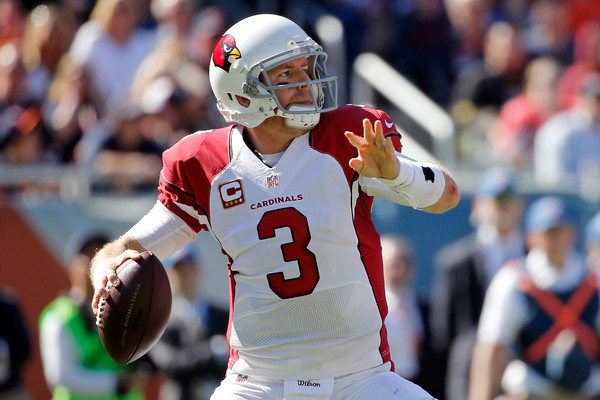 The Arizona Cardinals are looking unbeatable with Carson Palmer.

Palmer followed his strong Week 1 performance with another impressive game against the Chicago Bears in Week 2. The 35-year-old quarterback was 17-for-24 for a total of 185 yards and connected with wide receiver Larry Fitzgerald for three of his four TDs to lead Arizona to a commanding 48-23 road victory and their second win of the season.

Now, as they aim for their third-straight win in their Week 3 clash with the San Francisco 49ers, the Cards will look to rely once again on Palmer, who has improved to 15-2 in his last 17 starts, to lead his team to success once more.

That may just indeed be the case again, seeing as how the Niners secondary was lit up for 369 yards and three passing touchdowns by Ben Roethlisberger and the Steelers. Palmer, whose seven touchdowns is tied for most in the NFL with Tom Brady through two games, has some terrific deep threats in Fitzgerald and John Brown, who will give the Niner corners another stern examination.

The Cards could also have one of  their most reliable offensive weapons in Andre Ellington back after he was forced to sit out Week 2 due to a sprained right knee. Ellington, the 26-year-old versatile running back, rushed for 69 yards with a touchdown during Week 1 versus the New Orleans Saints.

Meanwhile, the duo of David Johnson and Chris Johnson could play a key role in the Cardinals’ chances of winning. Both running backs impressed in Week 2, combining for 114 rushing yards along with a touchdown by David.

The terrific Cardinals run defense, on the other hand, is well-equipped to shut down the Niners’ main weapon – the running game. The Cards have given up just 3.4 yards per carry, good for fifth in the league through the first two weeks.

Arizona is 4-1 SU and ATS in its previous five games as the favorites.

The Cardinals (-6.5) receive another huge output from Palmer to give them the 31-14 triumph.