No. 6 USC maintained its perfect record in the NCAA tournament with a convincing victory over Idaho on Saturday. The Trojans will look to stretch their unbeaten run even further when they take on arch-rivals Stanford in a marquee Pac-12 clash this coming Saturday.

Who will emerge victorious in this blockbuster showdown? Read on below for an in-depth breakdown of this college football matchup and while you’re at it, you can check out our previews of SMU vs. TCU and Florida State vs. Boston College.

Betting on the Stanford Cardinal

Stanford finally barged into the win column with an emphatic 31-7 victory over the UCF Knights on Saturday night. It was a huge victory for the Cardinal who bounced back from a disappointing season-opening loss to Northwestern.

[sc:NCAA240banner ]Leading the way for Stanford in this match was Kevin Hogan. The quarterback finished the game with a career-high 341 yards, including three passes of more than 40 yards. It was Hogan’s 53-yard flea flicker to Michael Rector that got the ball rolling for the Cardinal. The deep bullet to Rector was Stanford’s first touchdown of the season. Hogan later added a 7-yard touchdown pass to Christian McCaffrey and a 93-yarder to Bryce Love in the second half as Stanford avoided its first 0-2 start since 2006.

Stanford will look to make it two wins in a row when they take on USC this coming Saturday at Los Angeles Memorial Coliseum. The Cardinal have their work cut out for them, however, against a USC defense that has surrendered just 7.5 points per game this season. That’s the sixth-best mark in the FBS this year. For the Cardinal to record an upset this coming weekend, they need Love to continue his excellent play. The true freshman recorded 143 all-purpose yards Saturday against the Knights.

Their defense will also play a huge part in their quest to give USC its first loss of the season. Stanford’s defensive starters allowed just 2.0 yards per play in their win against the Knights. That will serve the Cardinal in good stead ahead of their game against the Trojans who are averaging 623.0 yards in total offense this campaign, fourth-best in the entire FBS.

Betting on the USC Trojans 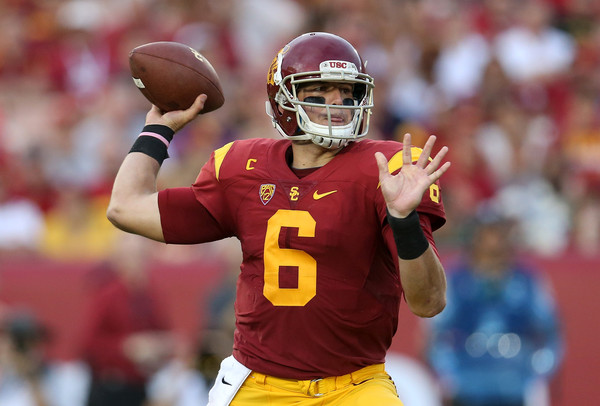 The USC Trojans will head to their Pac-12 showdown with Stanford with momentum on their side after destroying the Idaho Vandals, 59-9, on Saturday night. It was another convincing victory for the Trojans who improved their record this season to 2-0. The Trojans have won their first two assignments by a whopping average of 49.5 points.

Providing the impetus for USC’s sizzling start has been their phenomenal offense. The Trojans are averaging 57 points per game this season, sixth-best in the entire FBS. Just like in their opening game against Arkansas State, it was Cody Kessler who stole the show for the Trojans against the Vandals. He finished with a career-high 410 passing yards on 26-of-31 passing with three touchdowns. JuJu Smith-Schuster was Kessler’s favorite target in this one-sided game, establishing career highs with 10 catches for 192 yards, including two touchdowns on the night.

To illustrate the Trojans’ efficiency on the offensive end, six of their seven drives in the first half ended up with scores – five of which resulted into touchdowns. The Trojans gained a whopping 737 yards on 74 plays against the Vandals. That being said, they will have their work cut out for them this coming weekend against a solid Stanford defense. The Cardinal are allowing just 11.5 points per game this season, 18th in the entire FBS.