For the third straight year, the Virginia Cavaliers are a top seed in the NCAA Tournament. Thanks in large part to their world-class defense, the Hoos compiled an impressive 26-7 overall record this season. The Cavaliers will look to live up to that favorite tag starting on Thursday when they take on the Hampton Pirates in the first round of the national tournament.

Will Virginia stamp its class over Hampton? Or will the Pirates add to the craziness of March Madness and be the first 16th-seeded team to advance into the second round? Read on below for a breakdown of this Midwest region matchup and while you’re at it, you can check out our first-round previews of Duke vs. UNC Wilmington and Baylor vs. Yale.

March Madness No. 1 Virginia vs. No. 16 Hampton Preview

Despite losing to North Carolina in the ACC tournament final, the Virginia Cavaliers were able to lock down the No. 1 seed in the Midwest Region in this year’s national championship. The selection committee took into account Virginia’s solid 14-4 record against the BPI top 50 this season.

The Cavaliers are now dead set on going on a deep run in this year’s tourney and in the process notch their first Elite Eight appearance in 21 years. The odds are definitely stacked in their favor as the Cavaliers possess one of the nation’s best defenses. They are second in Division I in scoring defense, allowing just 59.7 points per game this season. Tony Bennett’s men have now held opponents to under 60 points per game the past five seasons.

What makes this Cavs version different compared to the past sides, though, is its offensive firepower. Virginia averaged over 70 points this season, the first time that has happened in Bennett’s seven-year reign. Providing the ammunition for the Cavaliers’ offense this campaign is Malcolm Brogdon. The ACC Player of the Year averaged 18.7 points per contest for Virginia this season. He averaged 21.7 points during the ACC tournament but was just 6-of-22 from the floor in the championship game against the Tar Heels.

Brogdon will look to turn things around against a Hampton defense that’s allowing 73.8 points per game this season, 233rd in the entire nation. Expected to contribute as well in this round of 64 contest is Anthony Gill. The Hoos’ second-leading scorer (13.3 PPG) reached double figures in four of his previous five NCAA Tournament games.

March Madness is finally here! Create a betting account now and cash in on all the exciting NCAA college basketball action.

Betting on the Hampton Pirates 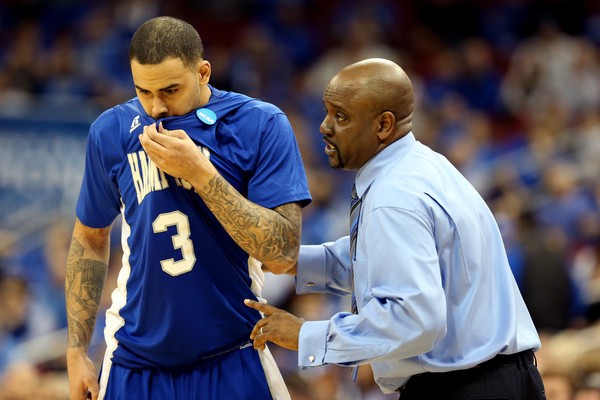 The Hampton Pirates will head into the national tournament with momentum on their side after capturing the Mid-Eastern Athletic Conference Tournament title in convincing fashion at Norfolk on Saturday. The Pirates uncorked a back-breaking 14-2 run in the final four minutes to win the MEAC championship for the sixth time.

Hampton used a balanced offensive attack to overwhelm South Carolina State in the championship game. Four players scored in double-figures for the Pirates in this title showdown. Leading the way for Hampton was senior Brian Darden who scored 22 points on 5-of-10 shooting from the field.

The Pirates will need to double their efforts, though, if they are to stun Virginia this coming Thursday. We all have to remember that a 16th seed has never beaten a top-seed in the history of the NCAA Men’s Basketball Tournament. That being said, this wild and crazy season has already served up plenty of shocking results so it wouldn’t surprise us a bit if a 16-seed finally advances to the round of 32 this year.

For the Pirates to accomplish that feat and record a major shock against Virginia, they will need Reggie Johnson and Quinton Chievous to deliver heroic performances this coming Thursday. Johnson ranked second on the MEAC in scoring (18.3) and tied for third in assists (4.1). Chievous, on the other hand, averaged 17.0 points and a league-best 11.0 rebounds for Hampton this season. He averaged 18.5 points and 11.5 boards in two tournament games for the Pirates a year ago.