What is Asian Handicap Betting?

The Asian Handicap is a popular way of betting on soccer that offers more value to the bettor than traditional money line betting. If you’re interested in making some money wagering on the world’s most popular sport, Asian handicap betting is just the way to do it.

What is an Asian Handicap?

Simply put, the Asian Handicap is a type of betting line that allows bettors more flexibility in how they bet on soccer.

Instead of deciding whether the result of a game is a win, loss or draw for a particular team, a bettor must decide whether or not to back one team or another against a handicap of goals set by oddsmakers. Essentially, this type of bet reduces the outcomes of the bet to win from three to two – a 33% chance of winning to 50%.

Asian handicap betting is similar to point spread betting. If you aren’t familiar with point spreads, take a look at our breakdown of the topic here. 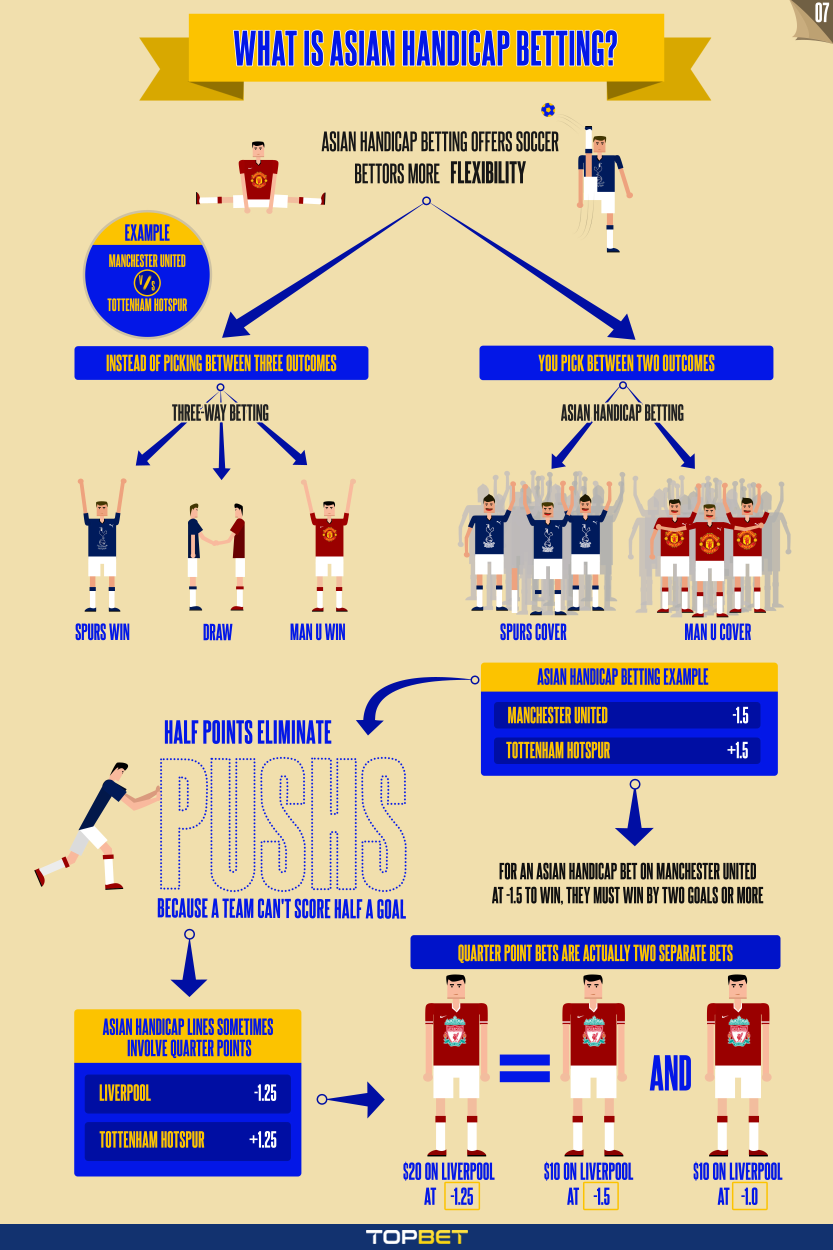 How Does Asian Handicap Betting Work?

To better illustrate how the Asian Handicap works, let’s say Wayne Rooney’s Manchester United is taking on the always-tough Tottenham Hotspur at Old Trafford, and the spread looks like this:

Think of a handicap as the headstart or deficit layed on two uneven teams before kick-off. Factors that can affect the handicap line are the strength of each team, recent form, the venue of the match, etc.

The “favorite” or the team considered by oddsmakers to be more likely to win is Manchester United. You can tell whether a team’s the favorite if its handicap has the “-“ sign. The “underdog” or the disadvantaged team is marked with a "+".

If a bettor places a bet on Manchester United at -2.0, then they must overcome their two-goal handicap by scoring three or more goals to win the bet.

Conversely, a wager on Tottenham would require them to win, draw or lose by one goal for the bet to win.

Let’s say Rooney has a strong game and scores two to lead Man United to a 2-0 victory. The handicap has been matched exactly, so bets on both sides are graded as a “push”. This means that the bet is voided and the money wagered is returned to you.

If the handicap is set at 0, then a punter must simply pick one team or the other to win the match to win the bet. If the result is a draw, the bet is a push.

Half Points in Asian Handicap Betting

The above outcomes are true for handicaps with whole numbers. But in instances where the handicap has a half-goal, a push is impossible to occur, and the wager can only win or lose.

Let’s say Rooney, an outstanding player (in his prime, anyway), was forced to miss the game in question, and United is looking less likely to win the game. The Asian handicap line might look like this:

With a line of -1.5, a wager on United wins if the team can win by two or more goals. If the result is a draw, loss or only a one-goal United win, then the wager on United loses. The difference, of course, is that bet on a half-point Asian handicap line cannot become a push – all bets will either be a win or a loss.

A split handicap bet, then, actually represents two bets at once. While it will often be written this way:

When you come across this type of line, it basically means that your wager will be split in half: one backing each handicap.

If Manchester wins by one goal, the -1.5 half of the bet loses, and the -1 is a push, for a loss of half of the original stake.

If Manchester draws or loses, both sides of the bet lose.

The advantage of quarter point bets or split handicap bets is that it allows you to back the team you think will win, but preserve some value if the game doesn’t go exactly as you’d expected it to. You may have liked United to win comfortably, but even if they just won by a hair (or a hair plug, in Rooney’s case), you still lose less than you would have in a plain -1.5 point spread bet.

Traditional three-outcome soccer odds can go very high, especially against two mismatched teams. If, say, Juventus (-1,200) vs. Sassuolo (+1,500) are the odds, one would need to risk a large amount on Juventus to see any profit, while the chances of minnows Sassuolo winning are too slim to be worth wagering on.

The advantage with Asian Handicap betting that makes it so appealing is that while the prices are lower – usually around -110 – the chances of winning while turning a profit at the same time are much better.

1 - Survive through NFL WEEK 8 and you will split $12,500 of the prize pool equally with all other surviving entries!*


Enter up to 3 times. That’s THREE FREE CHANCES to win your share of $25,000 in bonus cash site credits!


For instructions on how to play Survivor, and the general rules that apply to Survivor contests, see the How to play – Official Rules section.


*The $25,000 prize pool and all payouts from this free entry contest are comprised solely of bonus cash balance credits, and subject to a 20x playthrough requirement. Website eligibility requirements and site terms and conditions apply to contest entries.

1 – Predict the most winning teams in any given week and you will win the weekly prize of $1000! If multiple entries are tied for the most wins in a week, the prize amount will be split and paid equally to each of the tied entries*.


2 – For the season-long contest, the payouts are as follows*


For instructions on how to play Picks Pools, and the general rules that apply to Picks Pools contests, see the How to play – Official Rules section.


*The $50,000 prize pool and all payouts from this free entry contest are comprised solely of bonus cash balance credits, and subject to a 20x playthrough requirement. Website eligibility requirements and site terms and conditions apply to contest entries.

Loading...
Hi, do you need any assistance on creating your TopBet account? Click here and let us know how we can help you.
Please save your picks or changes.