What is Over or Under Betting?

Betting on the over/under is a popular and simple alternative to money line betting or point spread betting. Instead of betting on which team wins or by how much, this particular wager type looks at the combined total of the points/goals scored by two competing teams. 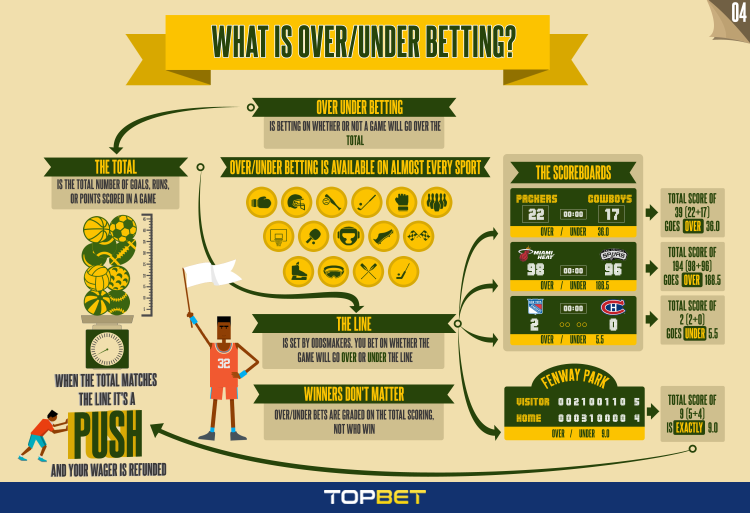 How and When to Place an Over/Under Bet

What is an Over/Under bet?

An over/under bet requires the bettor to pick whether the combined number of points, goals, or runs scored by teams in a given game will go ‘over’ or ‘under’ the total set by the oddsmakers.

The total is the number that oddsmakers predict set to encourage as much betting as possible on the teams’ combined scores to finish under or over that number.

Totals are set based on different factors such as the teams’ offensive and defensive abilities, recent history and trends, and how the public expects the game to play out.

Suppose the Miami Heat and San Antonio Spurs are doing battle in the NBA Finals and the totals line for Game 4 is set at 205. You think that it will be a close but high-scoring affair and that both teams will score at least 100 points.

A bet on the over means that the combined number of points the Spurs and Heat score must add up to more than 205 to win. So if you bet on the over and the final score is 105-101, you win because they scored 206 total points.

If the total score in the game were to hit exactly 205, as in a 103-102 final score, all bets on the total would be grades as pushes. A push is when a bet is nullified, or has no action. In this case, because the game total matched the line of 205, there is no action because there is no winner or loser. The stake of the bet is returned to your betting account, and is available to bet again immediately.

Some over/under lines involve half points so that pushes are impossible. For example, if the over/under line were set at 205.5, scores with 206 or more will win the over and 205 and below win the under. There is no chance of a push with half point totals.

The over/under can oftentimes be more advantageous to bet on as opposed to the spread or moneyline, especially if the game is between two evenly-matched teams and the winner can go either way or if you’re not entirely confident a team will cover the spread.

Since basketball and football are relatively higher scoring sports, they naturally have higher lines. The total for a basketball game between two high-scoring teams can reach the 200s, while football game totals generally range from the 30s to the 50s.

Lower scoring sports like baseball, hockey and soccer have totals in single-digits. Baseball’s are generally around six to nine runs, hockey’s hovers at five goals and soccer’s two to 3.5 goals.

Similar to betting on football or basketball spreads, the prices for the football and basketball totals are usually set at around -110, meaning you must wager $110 to win $100.

But in the lower-scoring sports (baseball, soccer, hockey), the price, not the line, will move if one side is being heavily bet on. So if the under at -110 is continuously bet on, the price would shift to -120 or higher, meaning you’d need to wager $120 or more to win $100.

But regardless of the stat used, the overall concept of the over/under bet remains the same and simple: how much is going to be scored in a particular game?

1 - Survive through WEEK 10 and you will split $10,000 of the prize pool equally with all other surviving entries!*
2 – The other $10,000 is split between the eventual winning entries of the contest, similar to traditional contests.*


*The $20,000 prize pool and all payouts from this free entry contest are comprised solely of free bonus money balance credits, and subject to the free money bonus rollover requirements as described in the site Terms & Conditions.  Website eligibility requirements and site terms and conditions apply to contest entries.  Please see the official Survivor contest rules page.

This contest starts in NFL Week 8. You may enter up to TEN FREE ENTRIES until 8pm Eastern time, Monday November 1st. (Enter earlier to have more teams to choose from). Please note, you may join the contest early, and you may return to the site after NFL Week 7 completes to make your first contest team selections.

1 - Survive through WEEK 15 and you will split $10,000 of the prize pool equally with all other surviving entries!*
2 – The other $10,000 is split between the eventual winning entries of the contest at the end of the NFL regular season (whether that be Week 18 or additional NFL regular season weeks, as determined by the NFL.)*