What is a Parlay Bet?

Parlays are simple and easy way to take your sports betting game to the next level. By betting on two outcomes at once, players can access huge payouts and take advantage of multiple sports or games happening in a afternoon, week, or season. 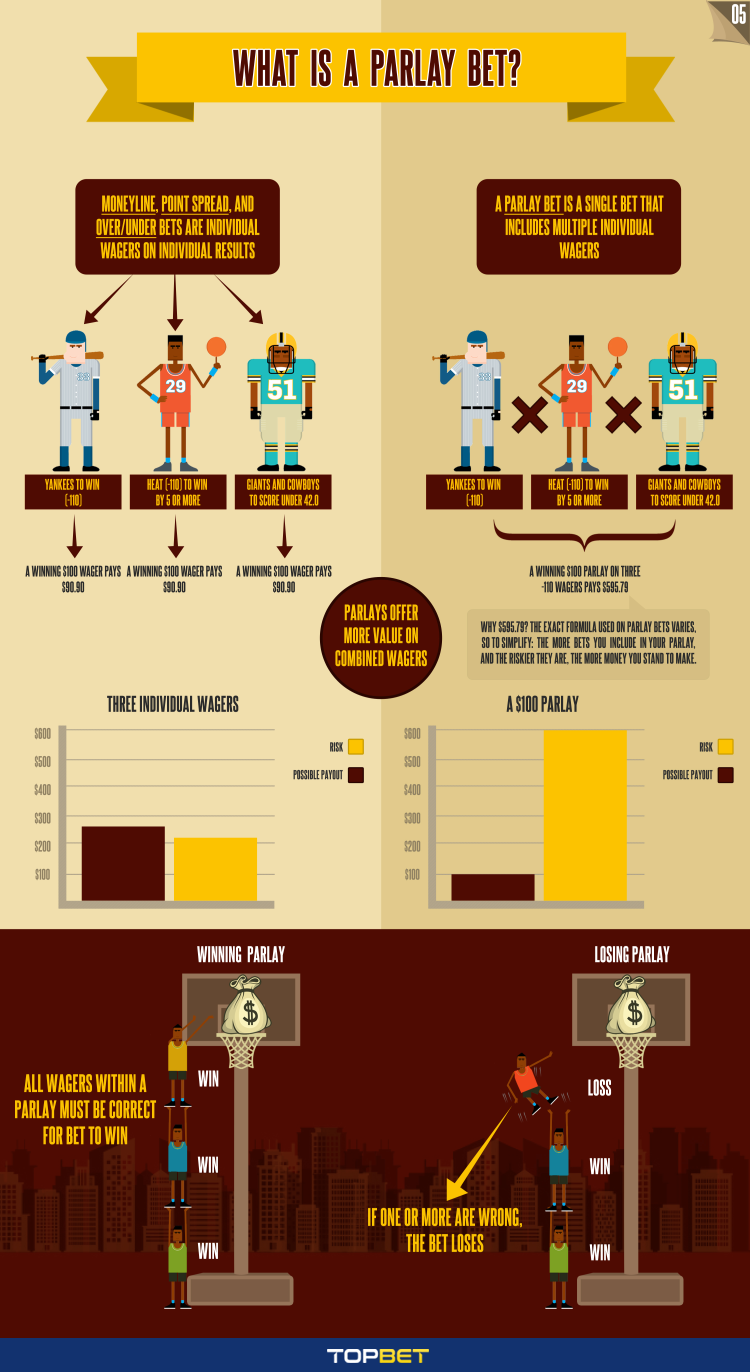 How and When to Place a Parlay Bet

A parlay bet is a bet with at least two wagers made within it. If any of the wagers within a parlay are losers, the bet is a loser. If all wagers within the bet are winners, you win a multiplied payout.

For that reason, parlay bets are sometimes known as combo bets or accumulators – the more lines you include in your parlay, the more they pay out if the individual bets are successful.

For example, let’s say it’s April and you are enjoying the beginning of the Major League Baseball season, and the lead up to the NBA playoffs. The Yankees are just getting started and the Miami Heat are playing in one of the last games of the season, and you happen to think both teams are going to win.

What parlays allow you to do is pick the winners in both games and get paid the multiplied value on your single bet rather than risking a larger amount on both games.

Because it is less likely for both outcomes to win, a $10 parlay bet on those two lines would pay out $26.44. So when, hypothetically, Ichiro Suzuki comes up with a home run-saving catch over the wall for his new home in New York, your small risk ends up being a big win.

One thing to remember when planning out your next parlay is that the outcomes cannot be correlated. That means there can’t be any relation between the outcomes you are betting on. For example, betting on the Heat to win and the game’s total points to hit the under is correlated because both wagers are from the same game.

Similarly, a parlay can’t be placed on the Heat to win a game and win their division, because if they win the game, they will be more likely to win the division.

With that said, sportsbooks are sure to monitor this rule so you don’t have to. If you can lay a parlay with a sportsbook, those bets aren’t correlated.

Another fun element to parlays: they scale well. The more bets or outcomes you include in your parlay, the more lucrative they can pay out, because the more bets that are included, the more multiplied the payouts become.

Betting $10 on a seven-team parlay with each team priced at -110 pays out $750, for example. Of course, it’s relatively unlikely all seven games will go your way, but then, that’s all part of the excitement of parlay betting!

1 - Survive through WEEK 8 and you will split $25,000 of the prize pool equally with all other surviving entries!*
2 – The other $25,000 is split between the eventual winning entries of the contest, similar to traditional contests.*


*The $50,000 prize pool and all payouts from this free entry contest are comprised solely of free bonus money balance credits, and subject to the free money bonus rollover requirements as described in the site Terms & Conditions.  Website eligibility requirements and site terms and conditions apply to contest entries.  Please see the official Survivor contest rules page.