The Detroit Lions are 2-1 in the young season following an unorthodox, but nonetheless impressive, victory over the Green Bay Packers at home. Next up for the Lions is a trip to New York, where the Jets will look to get back on track after a bad home loss to the Bears.

Speaking of the Packers and Bears, the two will square off in a juicy NFC North battle this week. See our preview of that game here, and read on for more on the Lions vs. Jets.

The high-scoring, pass-oriented Lions of Matthew Stafford and Calvin Johnson quite convincingly took care of the Packers for a 17-9 win in Detroit with their… defense and running game? You better believe it.

[sc:NFL240banner ]The Lions’ defensive line continued its strong start to the season by bullying the Packers all night long and holding them to just 76 rushing yards on 22 carries. Through three weeks, the Lions have the second-best rushing defense in the league at 63.7 yards allowed per game.

That control against the run had a carry-over effect on the passing game, where the Lions were able to put the great Aaron Rodgers under pressure all game long. Rodgers completed just 58.3 percent of his passes for only 5.8 yards per attempt against that pressure as the Lions held the explosive Packers passing offense to just 162 yards.

The Lions’ exceptional D-line will be the biggest impediment yet to the Jets’ prolific rushing attack. Stopping the Jets’ run will be imperative for Detroit as it puts the ball into the hands of Geno Smith. Judging from his four interceptions in three games, the Lions will live with the Jets QB deciding the game.

With Matthew Stafford struggling on offense (no TDs and two INTs), the Lions leaned on their running game, which ran 38 times for 115 yards. Although their 3.0 yards per carry wasn’t too impressive, it was effective in helping Detroit maintain the lion’s share (pun intended) of possession, 38 minutes to 22.

The Lions backs will have a tough time running the ball with any sort of success against the Jets’ league-best run defense, but with a passing game that includes Megatron, Golden Tate and Reggie Bush against a Jets secondary, it’s hard to see Stafford being held without a touchdown for a second-straight game.

Create a betting account now and cash in on all the terrific NFL action this season. 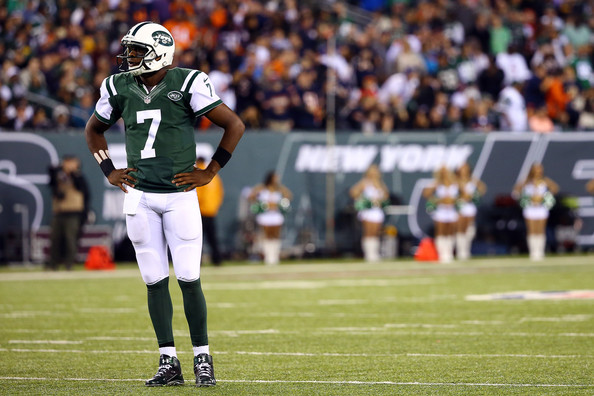 Geno Smith definitely has the ability to be a starting caliber NFL quarterback. He outgained the more accomplished Jay Cutler, 316 yards to 225, on Monday Night Football despite having a much less impressive stable of receivers.

But he keeps committing some huge turnovers, one of which was a pick-six off a screen pass and another an ill-advised pass in the end zone. The Jets’ inability to convert from the red zone (they went just 1-for-6) cost them dearly as they fell, 27-19.

If not for those costly turnovers, it would’ve been a very decent performance from Smith, who notched his second career 300-plus-yard game with a band of lesser-known receivers. With No. 1 receiver Eric Decker still suffering from a hamstring injury, Jeremy Kerley stepped up with seven receptions for 81 yards and a touchdown.

Smith also has the luxury of a strong running game to lean on. With 114 more yards on 26 carries against the Bears, the Jets rank second with 157.3 yards per game through three weeks. But running the ball well will be for useless unless Smith improves his decision-making and cuts down on the silly turnovers.

Meanwhile, the Jets defense turned up the heat on the Bears offense, holding them to just 20 points and 257 total yards. Aside from completely shutting down the running game (21 carries for 60 yards), the Jets also shut down Brandon Marshall, who was held to just one catch for six yards, and brought consistent pressure on Cutler.

Don’t be surprised to see the Jets implement a similar defensive strategy against the Lions’ danger man, Calvin Johnson, to take him out of the game force other Lions to make plays against them.

The Lions shut down the Jets’ rushing game, while Stafford outplays Smith as the Lions win on the road.