Don’t look now but it’s the Green Bay Packers, who are languishing down the cellar of the NFC North. But make no mistake about it. The division is still a wide-open race, and the Packers can return on track as soon as next Sunday when they play the Chicago Bears, who have been branded road warriors after collecting back-to-back wins away from Soldier Field.

Will the Bears get their first win at home? Or will the Packers extend Chicago’s drought for a home victory? Read on for more about this game below. You can also check out our previews of Giants vs. Redskins and Panthers vs. Ravens.

[sc:NFL240banner ]Well, what do you know? The Packers, who are the preseason favorites to win the NFC North title, are now wallowing at the bottom of the division after losing to the Detroit Lions Sunday, 19-7. Green Bay looks to get out of the cellar as soon as possible when the team heads to Soldier Field, where the Packers are 4-0 straight up and ATS in their last four games there.

However, the Packers’ winning pedigree at Windy City is about to be sullied should they continue to suck at things they were supposed to be good at – or have at least improved on during the offseason.

Take for example Green Bay’s rushing attack. If there’s such a thing as a sophomore slump, then Eddie Lacy is an early candidate to be the poster child of that phenomenon by season’s end. Through three games this season, the 2013 NFL Offensive Rookie of the Year has only 113 total rushing yards to show with no touchdowns.

Granted that Lacy was faced with three of the best teams in stopping the rush, he, nevertheless, has no choice but to get better. Next week, he’ll have little excuse to play poor again, as the Bears’ rushing defense ranks seventh worst (144.7 rushing yards allowed per game) in the NFL.

It’s not just a matter of getting better for the Packers’ backfield, though, since it also holds the key in freeing up Aaron Rodgers and the team’s passing game. Aaron Rodgers and his crew of receivers have had an uncharacteristic start this season, ranking just 21st in the league with 210.7 passing yards per game. Even though they missed Rodgers for a number of games last season, the Packers somehow managed to finish sixth in the NFL with 266.8 passing yards a contest.

The Packers are 6-1 ATS in their last seven meetings with Chicago dating back to 2011. 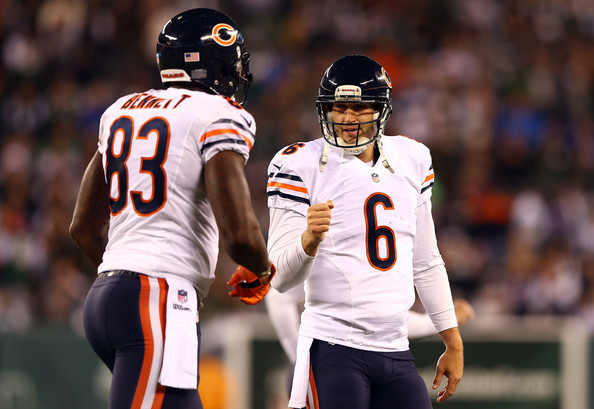 Chicago is going home unscathed after being away from Solider Field for two weeks. Back-to-back wins against the San Francisco 49ers (28-20) and the New York Jets (27-19), have the Bears sharing the top spot in the NFC North with Detroit.  They will now look to win their third straight when they welcome Green Bay at home next Sunday.

The toughness shown by the Bears the past two games was personified by wide receivers Brandon Marshall and Alshon Jeffrey. Marshall played with an ankle injury against the Jets. He even left the game in the second quarter, but returned in the second half, where he caught a touchdown pass only to be voided because of a penalty.

Jeffrey, on the other hand, finished with a team-leading 105 receiving yards on eight catches despite nursing a hamstring injury. The fact that they played relatively well while being bugged with these ailments suggests that the two talented receivers are bound to get better after another week of rest.

The injuries to the two players may even come as a blessing in disguise for Chicago as quarterback Jay Cutler found another worthy target in tight end Martellus Bennett. Cutler and Bennett hooked up for two touchdowns against the Jets. Bennett finished the game with 54 receiving yards on five catches.

Running back Matt Forte may also be about to see some daylight against Green Bay after a measly 33-yard output on 13 carries against the tough rushing D of the Jets. He’ll find himself next week faced with a Packers’ defense that allowed previous opponents to burn 156.0 yards per game on the ground, third worst in the NFL.

The over is 8-2 in the Bears’ last 10 outings overall, including games from last season.

The Bears stave off and win over a determined Green Bay team.