Kansas’ quest for a fourth national championship is off to a solid start after trouncing the Austin Peay Governors by 26 points in the Round of 64 on Thursday. The Jayhawks will look to sustain the momentum from that huge victory this coming Saturday when they take on the Connecticut Huskies who are fresh off a first-round win over the Colorado Buffaloes.

Who will grab the edge in this pivotal round-of-32 matchup?  Read on below for a breakdown of this South Regional showdown and while you’re at it, you can check out our second-round previews of No. 4 Duke vs. No. 12 Yale and No. 1 Virginia vs. No. 9 Butler.

March Madness No. 1 Kansas vs. No. 9 UConn Preview

Betting on the Kansas Jayhawks

Top-seeded Kansas stormed into the second round of the NCAA Tournament with an emphatic 105-79 win over Austin Peay on Thursday. It was a dominating performance by the Jayhawks who cruised to their 10th straight victory in an NCAA tournament opener.

Kansas was sizzling from the field the entire game, nailing 39 of its 70 field goal attempts for an incredible 55.7 percent clip. The Jayhawks were ruthless as well on the defensive end as they held the Governors to just 41 percent shooting from the field.

Sviatoslav Mykhailiuk and Perry Ellis led the way for the Jayhawks in this contest, scoring 23 and 21 points, respectively. Ellis’ impact was there for all to see as he made mincemeat of the Austin Peay defense. Ellis has been a vital cog in Kansas’ success this season, leading the team in scoring (16.7 PPG) and rebounding (5.9 RPG).

Make no mistake about it, though, the Jayhawks are not just a one-man team. Three other players are also averaging in double-figures for Kansas this season, namely Wayne Selden Jr. (13.3 PPG), Frank Mason III (13.1 PPG) and Devonte Graham (11.7 PPG). Their bench also stepped up big time on Wednesday with the Jayhawks’ reserves scoring 45 points against the Governors.

Thanks to their balanced attack, the Jayhawks have become the 16th-highest scoring team in the nation today, averaging a whopping 81.6 points per game. They will have their work cut out for them, however, in the next round as they’ll face one of the best defensive teams in the country in Connecticut.

The Huskies are 15th in scoring defense this season, allowing a measly 63.2 points per game. Even with those numbers though, the Jayhawks will still fancy their chances against UConn because of their excellent ball movement. Kansas had a total of 23 assists against Austin Peay. The Jayhawks are 34th in the nation in assists, averaging 15.9 dimes per game.

March Madness is finally here! Create a betting account now and cash in on all the exciting NCAA college basketball action.

Betting on the Connecticut Huskies 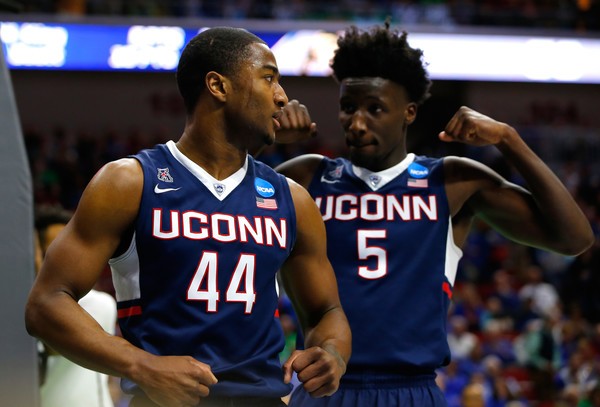 Connecticut booked a ticket to the second round of the national tournament with a thrilling 74-67 win over Colorado on Thursday. The No. 9 seed Huskies battled back from an 11-point first half deficit to record the upset win and in the process keep Kevin Ollie unbeaten as a head coach in the NCAA tournament.

Key to the Huskies’ victory against the Buffaloes was their terrific free throw shooting. UConn was simply exceptional from the charity stripe, going 22 of 23 from the foul line. That’s the second-best performance in their program’s history. Sterling Gibbs knocked down six free throws in the final minute to seal the win for UConn and pad their nation-leading percentage of 79.3.

Next up for the upset-minded Huskies is a Saturday clash with no. 1 overall seed Kansas. The two storied programs have never played in the NCAA tournament, despite 89 appearances and seven titles between them. If they are to stand a chance against Kansas in the round of 32, the Huskies will need to control the boards once again. UConn outrebounded Colorado, 36-33, in the first round on Wednesday. That’s quite a feat for the undersized Huskies considering the Buffaloes entered the tournament ranked fourth in the country in rebounding.

The onus then is on Daniel Hamilton and Amida Brimah to impose their will underneath the basket against Kansas. They combined for 21 points, 17 rebounds and six blocked shots in the win against Colorado. They will need to be at their best, though, against a Kansas team that grabbed 41 boards in the first round.

Apart from their rebounding, the Huskies will also need to continue their excellent play on the defensive end. They are 16th in the nation in adjusted defensive efficiency, allowing just 94.0 points per 100 possessions this season. If they can turn Saturday’s game into a low-scoring contest, the Huskies will have a great chance of scoring an upset.