The Chicago Bears are still winless this season. After being taken to the woodshed by the Seattle Seahawks on Sunday, the Bears go back home looking to end their seven-game losing streak that dates back to last season. Unlike the Bears, the Oakland Raiders are enjoying a successful campaign so far, as they’ve gone 2-1 in their first three games. Will the Bears end their skid? Or will the Raiders make it three in a row?

For more Week 4 game previews, you can also read our breakdown of Eagles vs. Redskins and Panthers vs. Bucs.

[sc:NFL240banner ]In a battle between two long-struggling franchises, the Raiders proved that they suck less and have a better future than the Cleveland Browns, when they eked out a 27-20 win at FirstEnergy Stadium on Sunday.

With the victory, the Raiders snapped their 11-game losing streak on the road. They’re also now at 5-5 ATS in their last five contests away from Oakland.

The future looked bright for the Raiders in the Cleveland game, with young guns such as Derek Carr, Amari Cooper, and Latavius Murray producing scintillating figures. Carr went 20 of 32 for 314 passing yards and two touchdowns without an interception.

Cooper, meanwhile, took advantage of the Browns’ injury-riddled secondary to finish with 134 receiving yards on eight catches. The Raiders’ excellent passing attack was complemented by their backfield, which got 139 rushing yards and a score from Murray. All told, the Raiders burned Cleveland’s defense for 469 total yards.

With Carr and Cooper slowly becoming a tandem to reckon with, expect Murray to exploit lapses by a Chicago defense wary of the Raiders’ air attack. 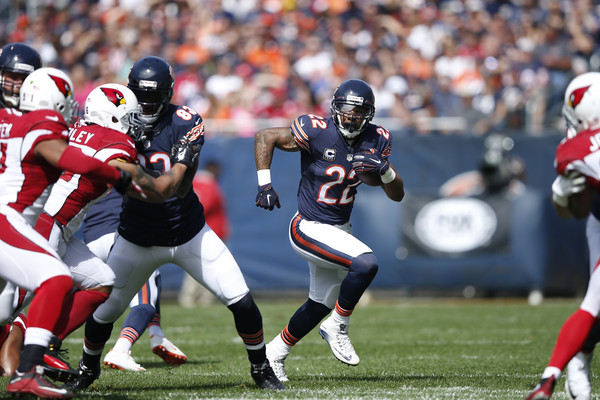 Jimmy Clausen is not the answer to Chicago’s woes. He’s not even good enough of a stopgap at the quarterback position while Jay Cutler remains out. That said, Chicago has no choice but to live and die with Clausen under center for at least two more weeks.

That much was ascertained following the Bears’ 27-0 loss at the hands of the Seattle Seahawks on Sunday. In that game, Clausen went just 9 of 17 for a measly 63 passing yards. Instead, the Bears decided to dump the ball onto their backfield as much as possible, with the team rushing the ball 27 times.

The Bears, however, may have to trust Clausen more this time around against Oakland, as the Raiders are 30th in the league with 323.0 passing yards allowed per game.

Hopefully for Clausen and the Bears, Alshon Jeffery should be 100 percent healthy by the time Week 4 rolls around. Jeffery (hamstring) hasn’t played since recording 78 receiving yards in a 31-23 loss to Green Bay back in Week 1.

If Jeffery continues to be sidelined, though, expect another heavy workload day for Matt Forte. Forte has so far been the Bears’ best player. He has 276 rushing yards this season, which includes a 74-yard effort in the loss to Seattle. Overall , the Bears are seventh in the league with an average of 132.0 rushing yards per game.

The over is 2-0 in Chicago’s last two home games.