After Sunday losses for the San Francisco 49ers and the Seattle Seahawks, the Arizona Cardinals now find themselves atop NFC West. However, holding on to that lead is a much stiffer challenge when they welcome San Francisco to the University of Phoenix Stadium. Will the Cardinals keep their lead in this stacked division? Or will the 49ers pull the Cards back down to earth?

Another crucial divisional game is set to happen on Sunday as the Baltimore Ravens and the Cleveland Browns jockey for position in AFC North. You can view the full preview of that game here. We have also picked every game against the spread if you prefer a more comprehensive preview experience. In the meantime, read on as we break down this pivotal NFC West showdown.

The San Francisco 49ers outgained the Chicago Bears 197-93 in total yards in the first half of their Sunday Night Football showdown and looked to be on the way to a blowout victory. However, 16 penalties and costly turnovers hurt them as they lost a total of 118 yards on the way to a 28-20 loss.

[sc:NFL240banner ]Offensively, quarterback Colin Kaepernick had a horrible fourth quarter. He was sacked three times for a loss of 15 yards and threw interceptions on consecutive drives. Fourth quarter aside, Kaepernick and the 49ers were pretty solid. Defensive end Aaron Lynch blocked a punt at the Chicago 8 to start off the night and Kaepernick had led four scoring drives heading into the fourth quarter.

Fatigue and a lack of focus are probable causes for the 49ers’ collapse. They also took a huge lead early in their season opener against the Dallas Cowboys before failing to score in the second half. In that game, they managed to escape with a win.

The 49ers are proven to be tough competitors on the road. They are 8-2-1 ATS on the road since September 2013.

Don’t let another late-game comeback pass you by. Create a betting account now and get in on the action. 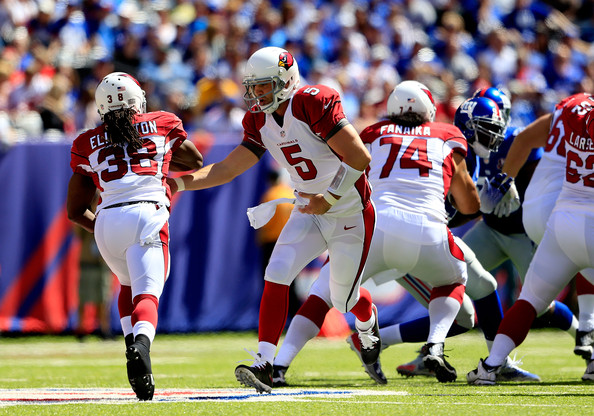 The Arizona Cardinals staged another come-from-behind win against the New York Giants on Sunday as they rallied from a 14-10 deficit heading into the fourth quarter to win 25-14. The Cardinals now head back to the University of Phoenix Stadium where they’ll host the San Francisco 49ers. The Cardinals are 4-1 in their last five home games.

Everything seemed to go right when it needed to for the Cardinals. Wide receiver Ted Ginn Jr. ran for a 71-yard punt return for a touchdown. Linebackers Sam Acho and Larry Foote each picked off the Giants’ Eli Manning. Meanwhile, kicker Chandler Catanzarlo scored 13 points on four field goal attempts and an extra point conversion.

They did all these things without starting quarterback Carson Palmer, who was a last-minute inactive in Week 2 with nerve issues in his shoulder. Taking the reins for Palmer was backup quarterback Drew Stanton who also figures to start against the 49ers. Starting his first game since 2010, Stanton went 14-for-29 for 167 yards to lead Arizona on three long, scoring drives.

With Stanton at the helm of their offense, the Cardinals will likely lean more on their running game, which looked good against the Giants. A banged up Andre Ellington rushed for 91 yards on a very healthy 6.1 yards per carry.

On the other side of the ball, the Cardinals will have to establish their pass rush early to pressure the 49ers’ Colin Kaepernick. Against the Bears, the 49ers QB was pressured into quick releases which resulted in incompletions and his two interceptions in the final frame. Having Kaepernick commit errors will give the Cardinals some key turnovers and shorten the 49ers’ drives.

Meanwhile, if the Cardinals’ secondary can cover the 49ers’ receivers, they’ll be able to shut down San Francisco’s passing attack. Making San Francisco make running plays will only play into the Cardinals’ rushing defense which limits opponents to 66.5 yards per game (fourth in the league).

The Cardinals are put in a tough spot to record three-straight wins in the season. They are 2-8 against NFC West teams since October 29, 2012.

A more focused San Francisco 49ers rebound and hand the Arizona Cardinals a loss. Take the 49ers to cover the spread as they bring themselves back in NFC West contention.