The Cincinnati Bengals continued their fantastic start to the season with an easy win over the Atlanta Falcons in Week 2. They can go 3-0 this coming Sunday when they face the Tennessee Titans, who were handed a beat down in their last game against the Dallas Cowboys.

Can the Titans bounce back from their horror showing last time around and upset the Bengals? Or will Martin Lewis’ men extend their perfect record? Read on for a preview of this matchup and while you’re at it, check out our previews of two other premier games in Week 3, Denver at Seattle and San Francisco at Arizona game.

It’s back to the drawing board for Tennessee Titans head coach Ken Whisenhunt as his players were thoroughly overplayed in their home debut against the Dallas Cowboys in a 26-10 loss.

[sc:NFL240banner ]The Titans’ defense simply couldn’t handle the Cowboys’ running attack as they allowed a whopping 220 rushing yards with running back DeMarco Murray carrying for 167 all on his own. What’s most discouraging for the Titans was how little they had the ball, maintaining possession for just 18 minutes and 49 seconds.

Quarterback Jake Locker had a miserable afternoon, completing just 18 of 34 passes for 234 yards, a touchdown and two interceptions. After posting a 111.4 passer rating in the opener, Locker was limited to a measly 7.6 rating in the first half as the Titans were quickly out of it, trailing the Cowboys 16-0 by halftime.

There were some positives for the Titans, however. One of which was the play of tight end Delanie Walker who caught 10 passes for a career-high 142 yards, including a 61-yard touchdown. It was the first time in his nine-year NFL career that he eclipsed the 100-yard mark as he set the third-highest single-game mark by a tight end in franchise history.

That will be good news for a Titans offense that has been steady so far this season. They are 11th in the league in total yards through two games this year, averaging 359.5 per game. They will also be encouraged by the fact that the Bengals are the seventh-worst team in the NFL in total yards allowed this season with Cincinnati allowing an average of 366.0 yards in their first two games this year. 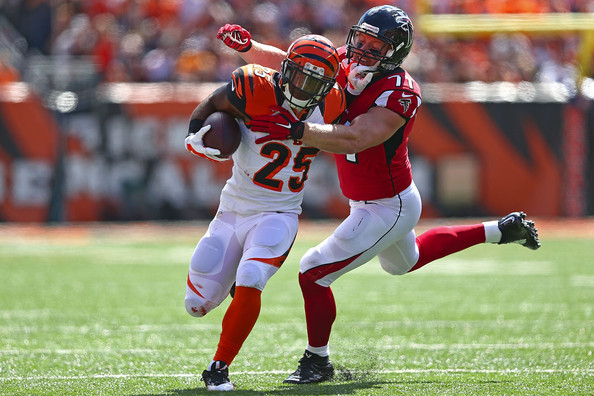 The injury bug has already bitten the Cincinnati Bengals but they don’t seem to mind as they eased past the Atlanta Falcons 24-10 in Week 2 action to record their second consecutive victory.

The Bengals are off to their best start since 2006 and they have their quarterback Andy Dalton to thank for that. Dalton has been solid for Cincinnati the past two games, posting a 276.5 passing yard average which is fifth-best in the league. In the game against the Falcons, Dalton completed 15 of 23 passes for 252 yards as finished the game without a sack or an interception for the second-straight match.

Aiding Dalton last Sunday was running back Giovani Bernard who ran 27 times for 90 yards, including a four-yard rushing touchdown. He also showed some versatility, catching a team-high five passes on his way to recording a career-high 79 receiving yards.

A key for the Bengals thus far this season has been the quality they are getting from players filling in for injured starters. The latest casualty was wide receiver A.J. Green who left during the opening series after aggravating an injured toe on his right foot. Picking up the slack was WR Mohamed Sanu, who led the team in Green’s absence with 84 receiving yards.

Green joins the Bengals’ long injury list, which already includes tight ends Tyler Eifert and Alex Smith, right guard Kevin Zeitler and Pro Bowl linebacker Vontaze Burflict. Injuries are part of the game, however, and the Bengals have responded to this adversity in the best possible way.

For the Bengals to remain undefeated, they will have to continue their good work on the defensive end. They have allowed just 13 points a game in their last two assignments which is fourth-best in the NFL this season. That is bad news for the Titans who struggled offensively in their last game against the Cowboys, scoring just 10 points.

The Bengals’ blitzing defense in particular was very effective as they shut down Falcons QB Matt Ryan in Week 2. After exploding for 448 yards and 3 TDs in Week 1, Ryan was limited to only 24 of 44 passes for 231 yards with one touchdown and three interceptions as the Cincinnati defense made it a priority to put the clamps on him.

The Bengals are a remarkable 9-1 in their last 10 home games dating back to September of last year.