It was a milestone victory for the New York Giants, beating the Dallas Cowboys 27-20 at home for Tom Coughlin’s 100th regular season win as a coach. Extending that number could be difficult, though, considering the Giants play a resurgent New Orleans Saints team at the Mercedes-Benz Superdome next in Week 8.

The Saints won back-to-back games for the first time this year, taking a dominant 31-21 victory over the then-unbeaten Atlanta Falcons in Week 6 before winning at Indianapolis just this past Sunday.

Check out some of this week’s big inter-conference matchups by heading over to our complete previews for the Packers vs. Broncos and Colts vs. Panthers.

In a day that its offense struggled, New York can thank its special teams and defense for snapping a five-game losing streak to the Cowboys on Sunday. Dwayne Harris returned a kickoff 100 yards for the game-winning touchdown in the fourth quarter, while cornerback Dominique Rodgers-Cromartie had two interceptions, one returned for a 58-yard pick-six. Safety Brandon Meriweather also added a pick of his own in the 27-20 victory.

[sc:NFL240banner ]The Giants’ secondary could come away with another interception this time around against New Orleans quarterback Drew Brees. Although he’s kept his interception numbers relatively low (four), they’ve come rather frequently, with at least one pick having been thrown in four of his six starts this year.

The meager offensive performance can be attribute to a tame outing from quarterback Eli Manning and the Giants’ receiving corps. Manning made 13 of 24 passes for a season-low 170 yards and no touchdowns, with not one New York receiver managing to reach 70 yards in the game.

Manning did manage to get the ball into the hands of No. 1 wide out Odell Beckham Jr., but Beckham caught just four of six passes for 35 yards. With Beckham limited to short yardage, Rueben Randle somehow gave Manning more of an option down deep, finishing with two catches for 68 yards.

Manning and co. could have a pretty big game this coming Sunday following their dud of a Week 7. New Orleans has been pretty vulnerable to the pass, allowing the third-most touchdowns through the air (14) this season. The Saints have also been vulnerable to the deep ball with a league-high nine passes traveling past them for 40 or more yards.

Although the Giants’ passing game stalled on Sunday, they at least managed to somehow get going on the ground using a running-back-by-committee approach. Shane Vereen led the way with 56 yards on just four carries, while Orleans Darkwa ran for 48 yards and a score on eight carries, and Rashad Jennings had 19 yards on five carries.

The Giants are 4-1 ATS in their last five games on the road.

Betting on the New Orleans Saints (3-4) 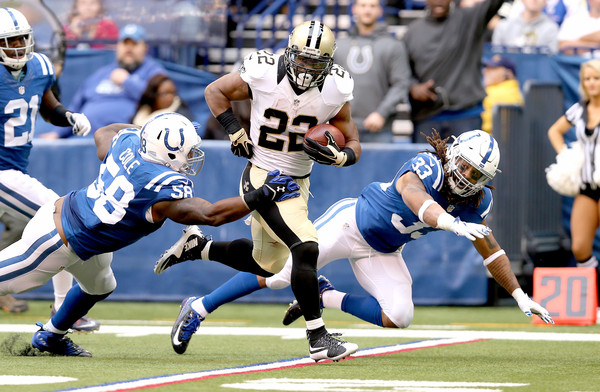 The New Orleans Saints won back-to-back games for the first time since last October with a balanced offense and a very good defensive performance. Running back Mark Ingram and wide receiver Brandin Cooks starred on offense. Meanwhile, defensive lineman Cameron Jordan, linebacker Stephone Anthony and cornerback Kyle Wilson took the spotlight on the other side of the ball in the 27-21 win over the Indianapolis Colts on Sunday.

The Saints’ offense thrived against Indianapolis’ lackluster defense. Quarterback Drew Brees passed for 255 yards with a touchdown and an interception. His 16-yard scoring pass to tight end Michael Hoomanawanui stretched the Saints’ first-half lead to 20-0. Cooks led the receiving corps with 81 yards, but could have had a better effort considering he caught just six of 13 passes thrown his way.

Expect Brees to put up some big numbers against the Giants; New York has allowed the third-most passing yards per game (288.3) this season. The Giants are also fifth-worst in the league with 26 passes of 20 or more yards blowing right past them.

The Saints could also draw some pressure away from Brees with some solid runs from Ingram, who ran for 143 yards and a score on 14 carries against Indianapolis — a whopping 10.2 yards per carry. Ingram could have another big game against the Giants, as New York has allowed 113.4 yards rushing per game this season.

On the other side of the ball, the Saints could cause the Giants’ quarterback Eli Manning into some miscues. Defensive lineman Jordan led the team with two sacks against Indianapolis. Meanwhile, linebacker Anthony and cornerback Wilson each had a pick. Take note that Manning has four interceptions over his last four games.

The defense will need to step up to keep big leads like the one they owned in Week 7 against Indianapolis from evaporating. Leading 27-0, the Saints defense allowed back-to-back scoring possessions, giving up 87- and 46-yard touchdown receptions by Colts receiver T.Y. Hilton to bring Indy back into the game.

The Saints are 3-1 ATS in their last four games against the Giants, including 2-0 SU/ATS at home.

The Saints continue rolling with a big home win over visiting New York. Create a betting account now and cash in on the big football games to come.