The East Region of the NCAA Tournament will be literally filled with Atlantic-Coast action as the North Carolina Tar Heels are scheduled to face ACC rivals the Notre Dame Fighting Irish in the Elite Eight clash this Sunday.

The Tar Heels flexed their muscles once again to dominate their competition on Friday, while the Fighting Irish escaped with yet another victory that was too close for comfort. Will UNC handily defeat another opponent towards their surge for the national title, or will Notre Dame prevail with another nail-biter for a rare appearance in the Final Four? Let’s take a closer look at this thrilling matchup below.

Then, head on over to our preview of yet another ACC Elite Eight showdown, Virginia vs. Syracuse, right after this.

March Madness No. 1 North Carolina vs. No. 6 Notre Dame Preview

There’s nothing like March Madness without the feisty North Carolina Tar Heels, eh? With the 101-86 rout of the Indiana Hoosiers on Friday, UNC advanced to the Elite Eight of the tournament for the seventh time in 12 years under the Roy Williams regime.

Strangely, however, this will be the first time in three years that the Tar Heels are back in the Regional Finals. Then again, this season’s team appears to be way better that those of recent seasons.

North Carolina is stacked in talent, that’s for sure. On Friday night, all five of the team’s starters scored at least 14 points, with standout guard Marcus Paige leading the way. Paige scored 21 points against Indiana, including six three-pointers which tied the school’s NCAA Tournament single-game record. That hot shooting night from Paige is a good omen for the Tar Heels, who are in the sub-300 range in the nation in three-pointers made and attempted per game.

What remains UNC’s key factor to victory is its defense, and it was certainly present on Friday as the team held the Hoosiers to below 50-percent shooting from the field – the 28th-consecutive game that the ‘Heels have held an opponent under that exact mark. With the low-scoring Irish due up next, the boys from Chapel Hill could very well coast to the Final Four.

Making matters worse for Notre Dame this Sunday is that its conference rival relishes having to play in Philly come March, as North Carolina has a terrific 4-1 record in NCAA Tournament games held in the City of Brotherly Love. 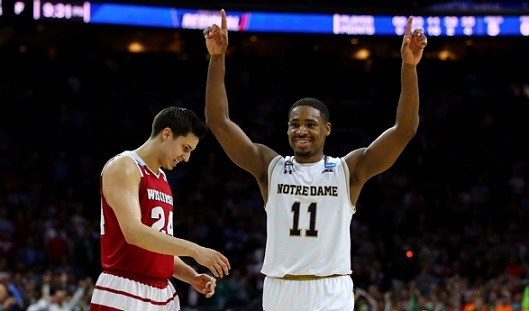 Surprise! The No. 10 Notre Dame Fighting Irish are back in the Elite Eight for the second-straight season, thanks to a thrilling 61-56 win over the Wisconsin Badgers on Friday where the team scored 10 points in the last 46 seconds of the contest to close out the tense Sweet 16 battle.

Notre Dame’s top three stars certainly didn’t disappoint, as Demetrius Jackson (16 points, six assists), V.J. Beachem (19 points, three 3-pointers) and Zach Auguste (13 points, 12 boards) all had fantastic nights. Beyond those three studs, however, the Irish had little to no help from the rest of the roster.

Yes, a close win over the pesky Badgers is still a win, but the team cannot afford playing all their games at the Big Dance down the wire. In fact, Notre Dame is the only team amongst the Elite Eight field without a double-digit win in the tournament this current campaign.

And what ill-fated luck that the Fighting Irish have to face their ACC foes once more in North Carolina. Okay, so they defeated UNC back in February 6, 80-76, as one of only six teams to have beaten the Tar Heels this entire season. However, their loss to the ‘Heels a month later at the conference championship tournament was simply brutal to say the least. That 31-point blowout on March 11 was the worst loss in Notre Dame’s Mike Brey era, and you bet the Irish are still smarting from that beat-down in the back of their minds.