One thing’s for certain: the Midwest Region of the NCAA Tournament this season will have a representative from the ACC in the national title game about a week from now. Both of the Elite Eight matchups from that side of the bracket this Sunday will feature Atlantic Coast rivalries renewed anew, beginning with the top-seeded Virginia Cavaliers going up against the No. 10 Syracuse Orange.

Will the Cavaliers continue their impressive run at the Big Dance, or will the Orange’s Cinderella season live to fight another day? Let’s take a closer look at this complelling battle below. Afterwards, check out what’s about to go down in that other ACC vs. ACC Midwest showdown we mentioned moments ago with our preview for North Carolina vs. Notre Dame right after this.

March Madness No. 1 Virginia vs. No. 10 Syracuse Preview

A relatively quiet night from ACC Player of the Year Malcom Brogdon should have the No. 1 Virginia Cavaliers worried heading into Sunday’s Elite Eight contest, but they should also be ecstatic to know that a resounding 84-71 win over the Iowa State Cyclones on Friday says a lot about the team’s actual depth.

Brogdon only finished with 12 points and five assists that night, much to the delight of the crowd that favored the literally Midwest-based Cyclones. Then again, the noise made by Iowa State’s backers were drowned out by the Cavaliers, thanks to a magnificent night for Anthony Gill. The senior forward scored a season-high 23 points to go with a team-high eight rebounds on Friday evening, more than making up for Brogdon’s own off-night.

It wasn’t just Gill who stepped up big-time against the Cyclones, as center Mike Tobey came off the bench with 18 points and seven rebounds off the bench. Together, and even without their star player putting up huge numbers, the Cavaliers still shot a superb 56 percent from the field and more than 80 points for the second time in this year’s tournament.

Nevertheless, having Brogdon back in beast mode will be a welcome addition back into UVA’s gameplan of advancing to the Elite Four. He has 19 20-point games this entire campaign, including 21 in the Cavaliers’ 75-63 win over Syracuse in their regular season meeting back in January.

Betting on the Syracuse Orange 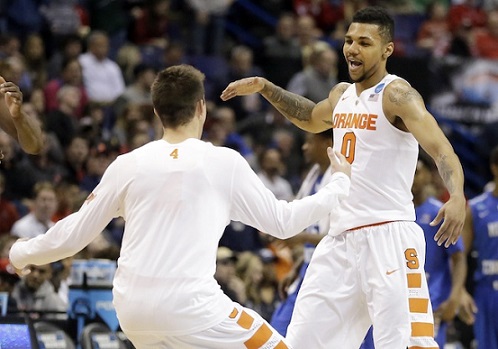 To see Jim Boeheim’s No. 10 Syracuse Orange team still in the thick of the national title hunt is simply awe-inspiring. Boeheim, who missed the first nine games of the season serving an NCAA-imposed ban, still has a lot of March Madness within him as seen in the 63-60 thrilling victory over the Gonzaga Bulldogs on Friday.

Even the basketball gods at one point may have favored the Zags in the closing moments of Friday’s contest, as the Orange saw a questionable call by the refs work against them when guard Tyler Cooney apparently stole Gonzaga’s inbound pass cleanly with the team up three and just 11 seconds left in the contest, until the referee called it out-of-bounds. Alas, a game-sealing block by big-man Tyler Lydon ultimately had Syracuse hold on to the three-point victory.

It was senior Michael Gbinije who once again provided the punch for the Orange with his 20 points, including the go-ahead lay-up with 22 seconds left to put his team up by three. Cooney also chipped-in 15 points, and freshman guard Malachi Richardson added 10 as well.

Unfortunately, those three guys we just mentioned were the only Syracuse players to score in double-digits, and that’s with the team starting just seven players against Gonzaga at that. It’s no surprise then as for why the Orange shot a dismal 36.1 percent from the field.

One silver lining from the rough shooting display on Friday was that Syracuse forced the Bulldogs to commit 17 turnovers. The Orange are not a takeaway-heavy squad, yet this has got to be an uplifting statistic heading into their showdown against Virginia on Sunday.

Then again, the Cavaliers are the second-best team in the nation with 9.2 turnovers surrendered per contest. That means the boys from University Hill need more than just their coach’s mystique and more firepower from every player on the roster instead to at least put up a good fight against their ACC rivals.

The Cavaliers make quick work of the Orange, 73-62.