Pitt’s got problems. The Panthers are mired in a rough losing skid of late, and have been pretty poor against ranked opposition all season. They’ll need to be at their very best as they visit No. 9 North Carolina in Chapel Hill on Sunday. Can UNC maintain its perfect home record, or will the Panthers break some Tar Heel hearts on Valentine’s Day?

Read on below for our preview of this Sunday ACC showcase. And for more of the weekend’s top offerings, check out our previews of Kansas vs. Oklahoma and Virginia vs. Duke.

The toughest stretch in Pittsburgh’s season is playing out pretty much as expected. The Panthers have lost their last two games – to then-No. 9 Virginia (64-50) and then-No. 12 Miami (65-63) – and three of their last four. Pitt has now lost all four of its games to ranked opponents this season, three of which coming by 13 points or more.

To the Panthers’ credit, at least they didn’t get blown out on the road against the Hurricanes on Tuesday. Michael Young and Ryan Luther had 12 points apiece to lead a balanced Panthers offense.

Despite ranking only 64th in points per game, Pitt is actually one of the more efficient offenses in the country this season. The Panthers are currently ranked at No. 21 in offensive efficiency. It’s been more the defense that has failed Jamie Dixon’s team.

However, Pitt’s offense could be good enough to keep things close against a North Carolina team that has lost two out of its last three, and struggled to put away ACC doormats Virginia Tech and Boston College.

Pitt has taken two of the first three meetings against North Carolina as a part of the ACC. Young, Sheldon Jeter, Jamel Artis, James Robinson and Chris Jones scored 68 of Pitt’s 89 points in last year’s 89-76 win.

Create a betting account now and cash in on all the top college hoops action. 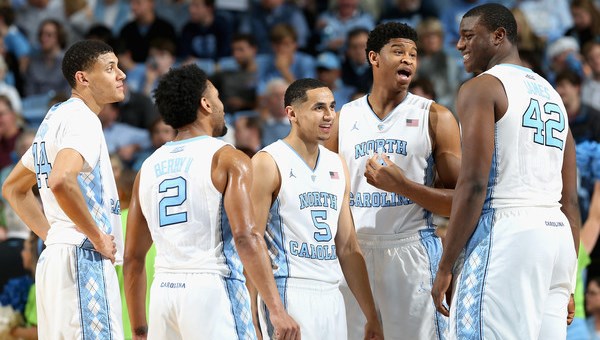 After suffering their first losing skid of the season with road losses to Louisville (71-65) and Notre Dame (80-76), the North Carolina Tar Heels just barely got past Boston College, 68-65, on Tuesday. Justin Jackson came off the bench after a shakeup of the starting frontcourt, and led the team with 20 points, the most he’s had since November.

North Carolina is averaging just 71 points per game over its last three, way down from its season average of 83.8 PPG (13th in the country). However, all three of those games were on the road.

The Tar Heels have been a much more formidable team in the friendly confines of Chapel Hill. They’re still a perfect 12-0 SU (but just 4-7-1 ATS) at home this season and are averaging 87.3 points per game, the sixth-highest mark in the country. They have won their five conference home games by an average margin of 14.6 points.

The Tar Heels have a lot of depth and very good balance on offense – six players are averaging 10 points or more – which should help them outlast the Panthers at home.

The Tar Heels have too much offensive firepower as they beat Pitt, 82-74.