The Longhorns and the Ducks faltered mightily down the stretch of the regular season, leaving both teams relegated to non-BCS bowl games. Nevertheless, emotions will still be running high for Texas, who will be playing their last game under long time coach Mack Brown.

It’s no BCS bowl but the Longhorns have their hearts set on scoring a win over Oregon in the Valero Alamo Bowl to give long time coach Mack Brown a befitting send-off. Brown will be stepping down from his position after 16 seasons with Texas, wherein he guided the team to two national championship appearances, winning one back in 2005.

In Texas’ last season with Brown at the helm, the team started and ended the regular season in the same manner – losing two of three games. The Longhorns were ranked No. 15 in the BCS in the preseason, but that was the highest the team ever got. They muffed their chances to win the Big 12 title and, consequently, an appearance in a BCS bowl when they lost to Baylor in their last game, 30-10.

Despite the loss to the Bears, Texas still managed to prevent Baylor from hitting their points-for average of 53.3 PPG. Combined with Texas’ paltry production, the game went well below the Totals line of 73. The Longhorns are 6-1 UNDER in their last 7 games overall.

Bet now on the Texas Longhorns. 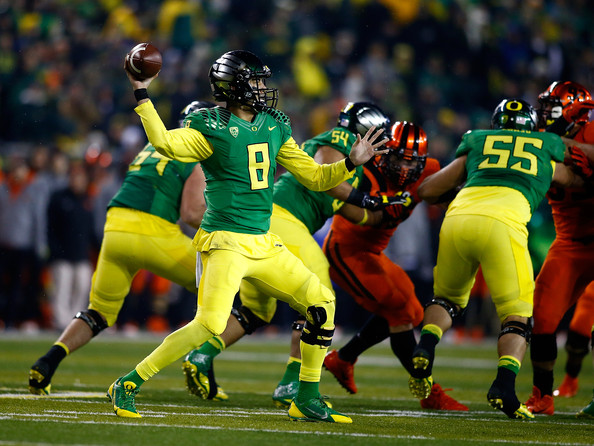 The Ducks were on the cusp of a BCS bowl heading into the last few games of the regular season. They looked like real contenders with an unstoppable offense that carried the team to an 8-0 SU record, including blowout wins over ranked teams Washington and UCLA. [sc:NCAA240banner ]

On the bright side, QB Marcus Mariota, whose name was among those thrown into the Heisman discussion for most of the season, announced that he would be returning to the program next year instead of departing for the pros. The dual threat quarterback has passed for 3,412 yards and 30 touchdowns. Additionally, he has rushed for 582 yards and 9 TDs.

Bet now on the Oregon Ducks.