The Ohio State Buckeyes lost their first game under Urban Meyer at the most inopportune of times, leaving the team without a ticket to the BCS National Championship. They’ll have to make do with an appearance in the less prestigious but still coveted Discover Orange Bowl against the ACC’s second best team, the Clemson Tigers.

The Buckeyes can take the Discover Orange Bowl as a sort of consolation prize after missing out on their chance to dance with the Seminoles in the BCS National Championship. [sc:NCAA240banner ]

It was Ohio State’s devastating loss to the Spartans in the Big Ten Championship Game last Saturday that got them here. Michigan State erased a seven-point third quarter deficit to nail a 34-24 win, dragging the Buckeyes by their feet and pulling them out of the No.2 spot in the BCS rankings. The loss was also the Buckeyes’ first under the Urban Meyer.

The 24 points put up by Meyer’s boys were the fewest all season long, but understandably so. The Spartans’ defense was the best in the nation going into the game. Still, Michigan State wasn’t able to completely hold off the rushing attack of Braxton Miller and Carlos Hyde.

Miller ran for 142 yards and two TDs while Hyde had 118 yards rushing. It was the fifth time this year that the Buckeyes have had at least two players rushing for 100 yards or more.

Ohio State is 9-1 SU in its last 10 games. The Buckeyes are also 5-1 OVER in their last six games away from home. 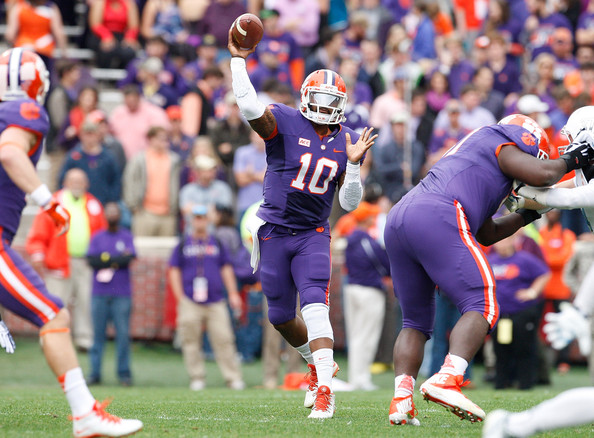 Florida State is BCS Championship bound, which makes Clemson the ACC’s representative in the Orange Bowl against the Buckeyes in January. [sc:NCAA240banner ]

The Tigers started the season with six straight wins, opening things up with a 38-35 win against then No.5-ranked Georgia. The team was handed its first loss of the season when it met the Jameis Winston-led Seminoles, who pounded the Tigers hard in a 51-14 defeat.

Senior quarterback Tajh Boyd, who’ll surely be hearing his name called in the next NFL Draft, is aiming to come out on top in his duel against Ohio State’s Braxton Miller. Though Miller is clearly the better rusher of the two with 1,033 yards (Boyd has 273), Boyd is heads above his Buckeyes counterpart in the passing game. Boyd has 3,473 passing yards, while Miller has only 1,860 yards in the air.

Though not of the same calibre as Michigan State, Clemson presents a defensive game to reckon with. The Tigers have limited opponents to 21.1 PPG this season.

Bet now on the Clemson Tigers.