To the surprise of no one, No. 1 seed North Carolina opened as a big favorite over No. 10 Syracuse in their 2016 Final Four matchup. The Tar Heels, the last No. 1 seed left in the tournament, have laid waste to all four of their opponents, but the Orange have been proving their doubters wrong every step of the way. Which (if any) side have bettors lean toward, and was their activity enough to alter the spread or over/under line?

Find out below as we discuss the changes in the lines for the all-ACC Final Four showdown between the Tar Heels and Orange. Also, don’t forget to check out the line movement for the Oklahoma vs. Villanova matchup.

Did the line move?

The spread hasn’t budged much at all. TopBet opened the line at UNC -9.5 (other sportsbooks had it at 9) and despite half-point fluctuations which pushed it down to 9, the line has stabilized back to -9.5 in TopBet.

In terms of the spread, the momentary shift down to 9 was likely sharp bettors grabbing that big number, perhaps anticipating the public money to go heavy on ever-popular UNC. But while it was enough to swing the line back to 9.5, the number has been big enough to dissuade huge action on the Tar Heels.

With the totals, bettors probably see Syracuse’s 2-3 zone, coupled with UNC’s shaky three-point shooting, and expect the game to be a much cagier contest than the high-scoring affairs the Tar Heels have been involved in during the tournament.

Create a betting account now and cash in on the most up-to-date Final Four spread and over/under lines.

Who will cover and why? 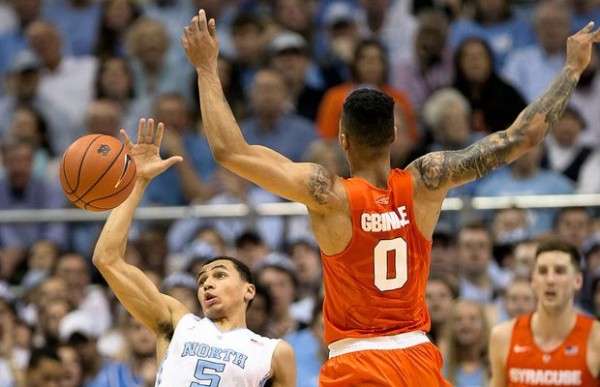 North Carolina has won its four tournament games by an average of 16 points. It’s a worthy No. 1 seed, and Syracuse is a No. 10 (and probably wasn’t tournament-worthy at all). The Tar Heels swept Syracuse in their two ACC regular season games this year. It just feels like a matter of time before these overachieving Orange finally fall back down to earth.

At the same time, though, 9.5 is a big number, and the familiarity between the two teams (and the two coaches) makes it tough to see a blowout in the works. The Orange pose a tough matchup on both ends of the court with their size and length, and should be able to affect the style and lineup UNC plays with. They might not be able to win straight-up this time, but they are definitely capable of covering the 9.5-point spread.

Syracuse’s style is a more low-scoring affair, as evidenced by their first four tourney games. Only one of their games has even broken the 130-point barrier, and expect their contest against UNC to also go under 145.