We’ve got an equal helping of the expected and the unexpected for the first of two Final Four bouts in Houston this coming Saturday, as the top-seeded North Carolina Tar Heels prepare to square off against the No. 10 Syracuse Orange.

The Tar Heels have pretty much cruised right on through the final stages the Big Dance, while the Orange have shocked the basketball world time and again with one gritty performance after another.

Only one team from this relived ACC rivalry will advance to the the national title game on April 4. Will it be the the boys from Chapel Hill, or the ones from up on University Hill? Let’s take a further examination of this stunning showdown below.

For a closer look at the other similarly-thrilling Final Four matchup on tap, head on over to our in-depth preview for Villanova vs. Oklahoma right after this.

March Madness No. 1 North Carolina vs. No. 10 Syracuse Preview

Another March Madness, another monumental run for the North Carolina Tar Heels.

Top-seeded UNC defeated the Notre Dame Fighting Irish with relative ease on Sunday, 88-74, to clinch its NCAA men’s basketball record 19th Final Four berth. It was also the first time that the Tar Heels made the tournament’s semifinal stage since 2009, which also happens to be the year that the team last won the national title.

Even though star guard Marcus Paige (13 points) sort of cooled down against the Irish, North Carolina’s other standout senior, forward Brice Johnson, more than made up for Paige’s lackluster night. Johnson grabbed his 23rd double-double of the season – a new school record – behind 25 points on 61.6-percent shooting from the field along with his 12 rebounds.

It wasn’t just Johnson who dominated the boards on Sunday, as the Heels collectively outrebounded Notre Dame 32-15 (13-5 on the offensive end). They ranked 11th in the nation this season in total rebounds (40.9 RPG), so it comes as no surprise that extra possessions off the glass have led them to the Final Four.

Furthermore, North Carolina has pretty much kept their tourney opponents far from striking distance, winning their four prior games at the Big Dance by an average of 15.4 points.

Not only that, but in this season’s ACC and NCAA tournaments, the Tar Heels have outscored their conference rivals by a combined 66 points. Considering that Syracuse also lost all two of their regular season games against Chapel Hill’s finest by a total of 16 points, it seems like a foregone conclusion that the Orange will finally meet their demise this Saturday.

Betting on the Syracuse Orange 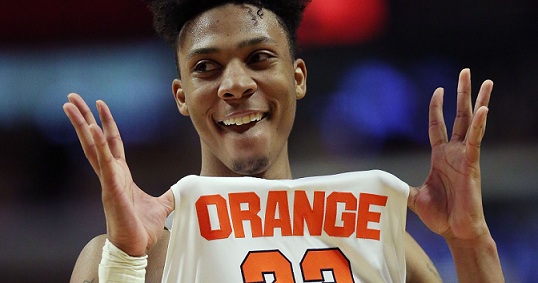 Down by 16 points at the start of the second half of the Elite Eight clash against the Virginia Cavaliers on Sunday, it was looking like the No. 10 Syracuse Orange’s magical season was about to come to a brutal end.

But that was until breakout freshman Malachi Richardson went supernova on the Cavaliers. Richardson scored 21 of his 23 points in the final frame of the contest to vault the Orange to victory and into the Final Four with a final score of 68-62. With the win, Syracuse became the first-ever 10th seed in the NCAA Tournament to make the Final Four, and just the fourth double-digit seed overall.

“I’ve never been prouder in all my 40 years as coach of a basketball team as I am of this team tonight,” long-time Syracuse head coach Jim Boeheim said of his beloved team. However, Boeheim has still got to be concerned with how his boys shot from the floor on Sunday night.

The Orange converted just 36.8 percent of their field-goal attempts against Virginia, whereas the Cavaliers managed to shoot better at 41.5 percent from the field and still lost the contest. What proved to be key to Syracuse’s victory was their 13 forced turnovers that led to 15 points, while UVA fell behind in the takeaways department with just seven in the game.

Then again, the Orange would be hard-pressed to steal some possessions away from UNC, who ranked 31st in Division I with just 10.8 turnovers per game. If University Hill’s lads can’t find their shooting stroke and also fail to keep up in the battle of the boards against the Tar Heels, all their effort and tenacicty to get this far to the Big Dance may just be all for nothing.